Limerick secured their first three-in-a-row of senior hurling titles but only after holding off a second-half charge from Kilkenny in an electric All-Ireland final.

On a sweltering July day in Dublin, Limerick brought the heat from the start and were five points up after a quarter of an hour.

Gearóid Hegarty had had a quiet semi-final but he's the big man for the big day and smashed Kilkenny for 1-05 in all, his goal after four minutes sending the champions into a lead they held for all but a couple of minutes.

Limerick started like a train but Kilkenny, as we knew they would, fought like dogs. A couple of half-goal chances were snuffed out but, thanks to seven frees from TJ Reid, they somehow went in only four points down at the break, 1-17 to 0-16.

Highlights on #sundaygame from 9.30pm

Kyle Hayes and Tom Morrissey were on fire and racked up 0-04 each from play as Limerick repeatedly threatened to pull clear but Kilkenny brought on Walter Walsh at half-time and started to get more joy from going long.

Goals from Billy Ryan and Martin Keoghan twice helped to briefly drag the Cats back on level terms, and every one of their subs scored - Richie Hogan hitting an equaliser in his first appearance of the season.

But each time the champions, who hit only five second-half wides, put daylight between them again and Kilkenny were left chasing a third goal they just couldn’t find.

Captain Declan Hannon lifted Liam MacCarthy alongside the injured Cian Lynch, whose absence makes this achievement all the more impressive.

Limerick’s treble is the first since Kilkenny in 2008 and only the ninth overall. They are just the fourth county to achieve the feat after today's opponents, Cork and Tipperary.

Kilkenny's record losing total would have been enough to win 11 of the last 13 finals but their wait now extends to eight years at least.

Gearoid Hegarty rockets the ball into the top corner of the net to give Limerick the ideal start. Live now, highlights on #sundaygame from 9.30pm

Roared on by the majority of the first full house at Croke Park in three years, Limerick had exploded out of the blocks, Hegarty holding off Kilkenny captain Richie Reid, collecting Seamus Flanagan's foot-flick and smashing a shot across Eoin Murphy into the top corner of the net.

Huw Lawlor marshalled Aaron Gillane well throughout, holding him to three points from play, but the Patrickswell man improvised to kick his side 1-02 to no score ahead before a TJ free finally got them on the scoreboard after seven minutes.

Both teams were tackling relentlessly and loosely, with a lot let go, and though Limerick were finding huge space in the half-forward line, Kilkenny were far more reliant on frees and scores from their half-backs - Richie Reid, Mikey Carey and Paddy Deegan (0-02) were all accurate from distance as they closed within three.

But so was the excellent Diarmaid Byrnes, Hayes and, particularly, Hegarty, who was effortlessly finding space but also holding off multiple men whenever he couldn't. His second point from 65 metres out on the right wing emphasised the relative ease with which Limerick were scoring.

Gillane pounced on a loose ball, a Kilkenny puck-out was turned over and converted by Flanagan and Limerick were five up after 20 minutes, 1-10 to 0-08.

Adrian Mullen hit back with the first of his three points, the most any Kilkenny man managed from play, and Sean Finn shepherded out Billy Ryan on the end line, but Limerick were dominating the puckouts and when Hawk-Eye overruled the umpires to award the unstoppable Hegarty his third from the sideline, the gap stretched to six.

TJ Reid was held by Nash when driving towards goal – the free was given but no card then or on the day, despite a few being deserved. Hayes made a fine catch and sent over his second but the Cats finished the half strong, two TJ frees and a brace from Padraig Walsh cutting the gap to four at the interval.

The start of the second 35 encapsulated the frustration Kilkenny looked set to endure for the day. From the throw-in, Mullen soloed towards goal. Ryan took over but almost a minute of possession and frantic Limerick defending ended in a wide from Eoin Cody. Hayes grabbed the puckout and banged over his third. Gillane got out in front of Lawlor and made it a six-point game again.

Then, the first big twist. Big Walter, a half-time sub for Cian Kenny, unexpectedly took on Nash, got around him and squared for Ryan to fire home after the sliotar had eluded Martin Keoghan.

Walsh fired over a point himself from the sideline after the wide-open Hegarty and Mullen exchanged scores but Lawlor needed to throw his body in the way of another goal-bound Hegarty effort.

Billy Ryan with the finish after good work by Walter Walsh. Big impact from Walsh. Highlights on #sundaygame from 9.30pm

Forty-five minutes in, Kilkenny struck again. A fantastic catch and handpass from a dehurled Reid, Cody flicked the ball across goal and Keoghan turned to belt it past Nickie Quaid at the near post. John Donnelly came off the bench and scored with his first touch. Somehow, Kilkenny were level.

Limerick could have been forgiven for being rattled but that’s not what they do. Byrnes won and converted a free on his own 45. Tom Morrissey caught fire, sending over three from play in 10 minutes, the last after a superb leap. But Kilkenny came once more, Reid with two frees and Mullen again. Hawk-Eye finally turned against Limerick, ruling out a Reidy effort.

Richie Reid missed the chance to tie it up but in the 63rd minute Richie Hogan, 34 next month and making his first appearance since last year’s All-Ireland semi-final, brilliantly juggled a high ball to level.

How would Limerick react to this? Calmly and remorselessly, as always. Morrissey set up Hayes for his fourth and was then replaced by Cathal O’Neill, who immediately justified John Kiely’s decision. Fellow sub Conor Boylan got in on the action and Hegarty closed out his man-of-the-match performance as they moved five clear heading into four minutes of injury-time.

Surely the game was over? Not quite. Tommy Walsh and Alan Murphy split the posts. David Blanchfield pointed but a goal was still needed. Limerick worked it down the field and kept it there.

Fans and management erupted at the final whistle – though never behind, Limerick’s fourth title in five years was the hardest won of all.

They'll be back next year aiming to join the elite four-in-a-row club. Who can stop them? 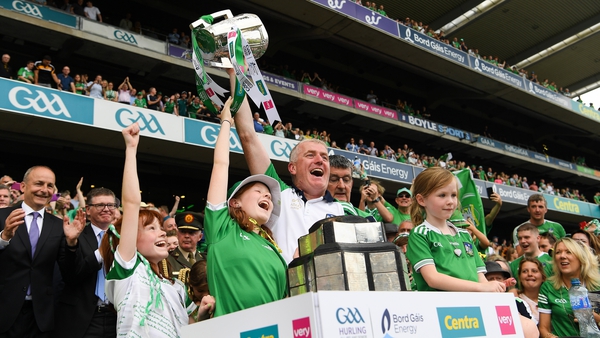