Limerick edged out Kilkenny in a pulsating All-Ireland hurling final. With massive performances on both sides, it was Limerick wing-forward Gearóid Hegarty who stood out most. 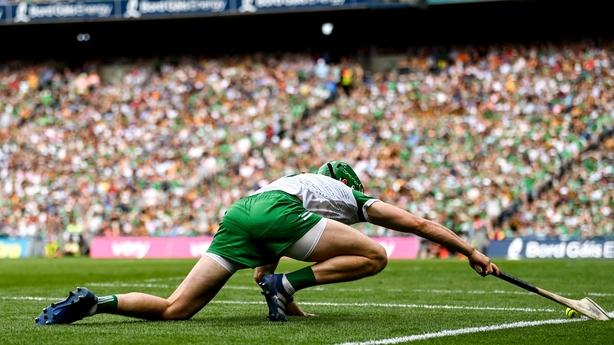 Had joy with long puck-outs. No real test in first half beyond a couple of dropping balls and Kilkenny's goals were both from close range. 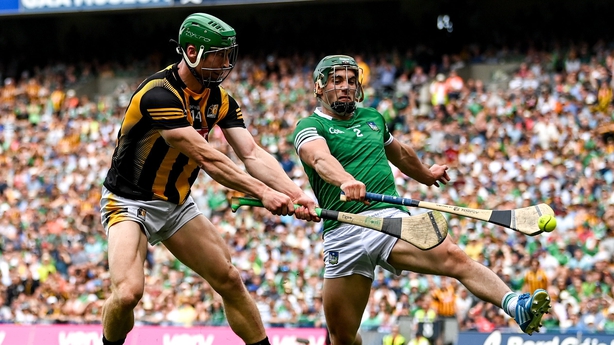 Played his part in keeping Kilkenny full-forward line tied up. Showed composure on a number of occasions as Limerick played the ball through the lines against a determined Kilkenny attack. 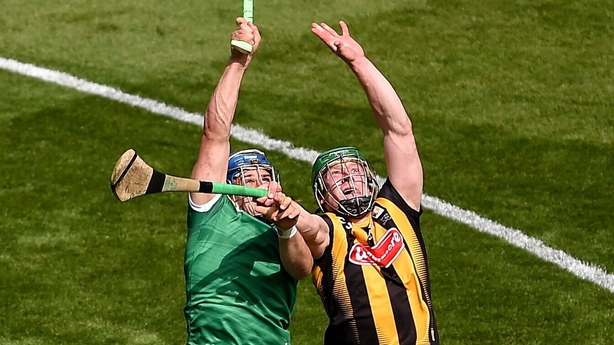 Stood up to be counted in the frenetic seocnd half. Very strong under a Eoin Cody high ball that led to Conor Boylan point. Committed a silly foul on Browne, which resulted in a blood substitution. Some wonderful fielding but also gave TJ Reid another handy free. 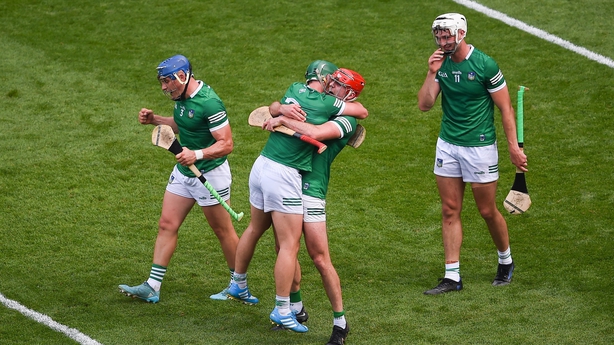 Detailed with marking TJ Reid on occasion and perhaps not the same influence as previous days. But did his defensive job as always. One superb clearance to set-up a Declan Hannon point and then fouled Reid for a free. 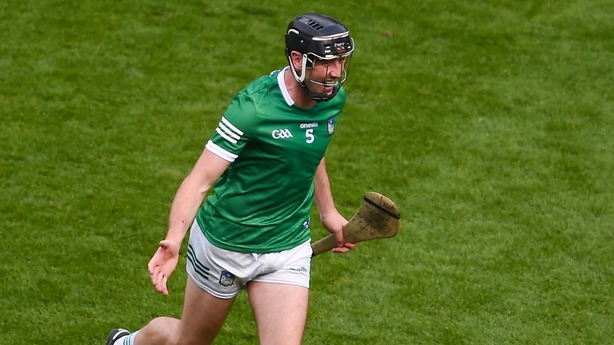 Immense performance. Outrageous flick earned first free of game, which he pointed himself. His second point came from play after he caught an Eoin Murphy puck-out. Then more huge frees either side of half-time. Defensively made a vital interception in 66th minute which led to Cathal O'Neill score. Calmness personified. Hoovered up a lot of breaking ball, showed for passes and scored his customary point with a 30th minute burst from defence to score from distance. 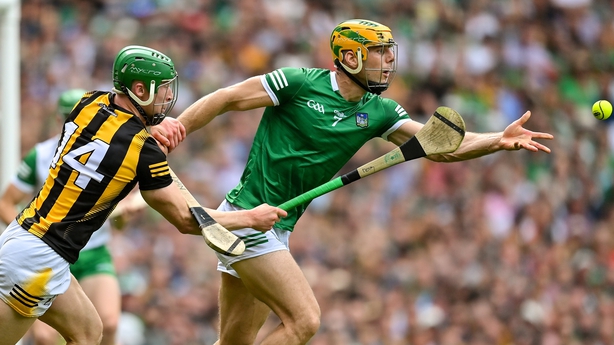 Became sixth half-back to score from play in first half with a point on stroke of 35 minutes after good work by midfielders. Stood up in the cauldron that was the middle third. 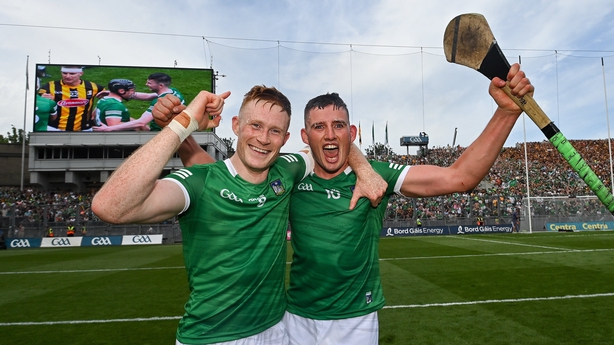 The enforcer in a team renowned for their physicality. Huge tackle on John Donnelly in injury-time, which all but sealed the game. Usual appetite for work, Made point for Gearóid Hegarty as he showed huge strength to ride a couple of Kilkenny challenges. 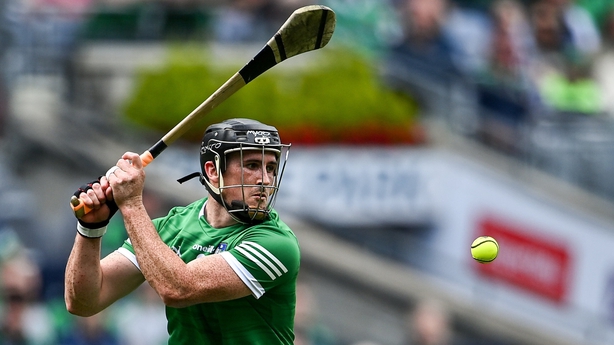 Performed his typical link work between attack and defence but not his most influential outing.

Gearoid Hegarty rockets the ball into the top corner of the net to give Limerick the ideal start. Live now, highlights on #sundaygame from 9.30pm

Raised his fist in celebration after landing a 85-yard point to make it a five-point game in injury-time. One of the great All-Ireland final performances. Showed superb skill and strength to collect loose ball and burst past Richie Reid before blasting shot past Murphy. Scored 1-05, including a couple of gems from sideline, but also contributed in defence and always available for puck-outs. 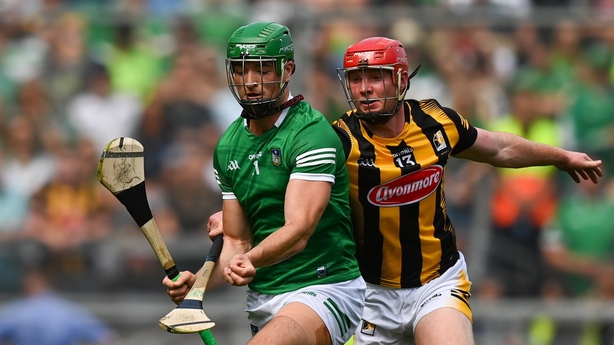 Powerful showing from the physical centre-forward. In between a few helmet changes early on he scored an early point and won a big free on Mikey Carey. Won an important free from Mikey Carey when back in white helmet. Points either side of half-time and a calm finish down the stretch as he showed for puck-outs before dropping into full-back line to shore up the defence. 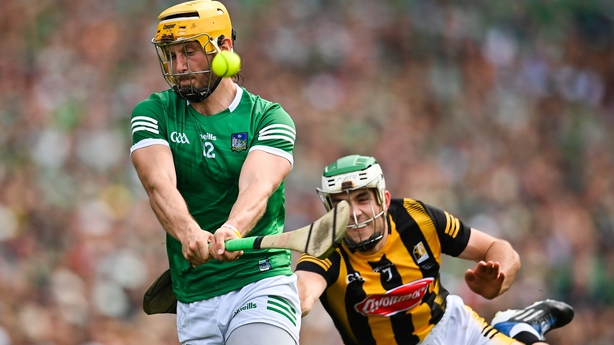 Worked hard for his team-mates and showed for puck-outs in an energetic display. Scored four points to boot. Great in the air at times. 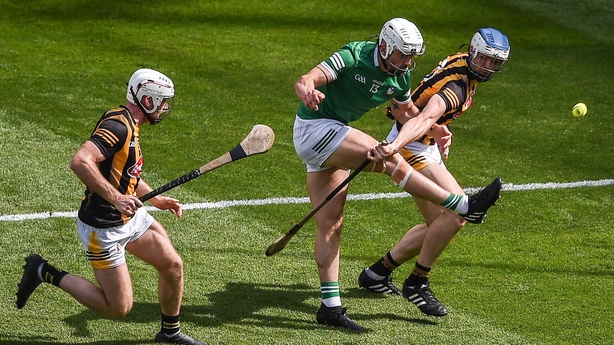 Had nothing easy with Huw Lawlor. Kicked his first point when a goal was possible after super catch over the Kilkenny full-back. Struck his frees and chipped in with a few tidy scores from play. 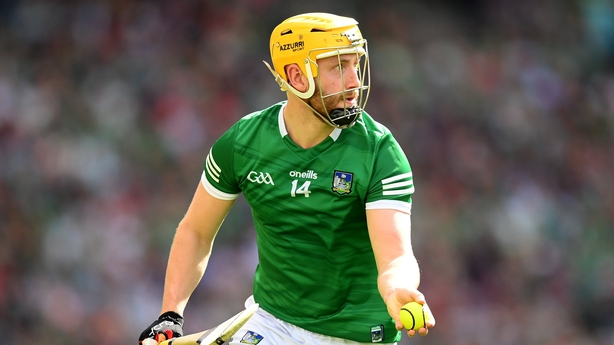 Went out of the game in second half. Won some dirty ball early on, won a couple of frees and chipped in with a score in the first half. 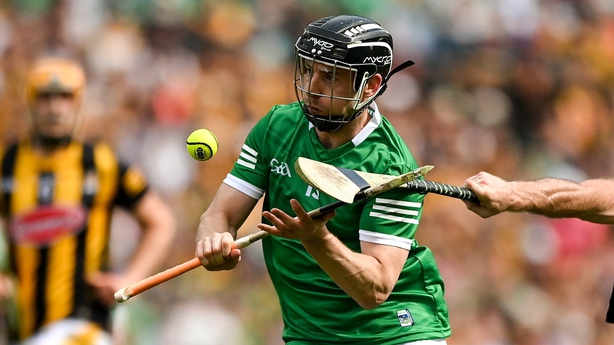 Didn't really go his way. Struck a poor wide early on after making space for himself, which was followed by another. Committed a foul on Mikey Butler when Kilkenny really needed a score. First man withdrawn.

Struck a poor wide with chance to make it four-point game.

No repeat of semi-final heroics as he had a huge shot in 61st minute chalked off by Hawk-Eye.

Contributed to the win with a point to make it a three-point gap in 67th minute.

Hawk-Eye called upon to confirm a huge score from the talented young forward. 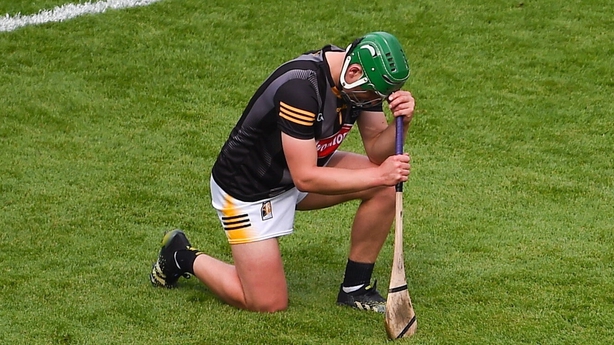 The three-time All-Star had no chance for Gearóid Hegarty's early goal. Had to mix up his puck-outs as Limerick pounced on anything short. 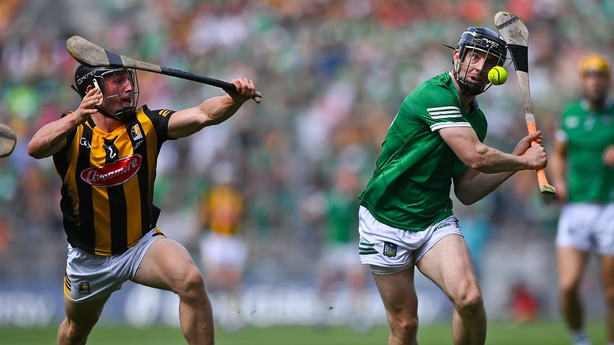 Felt the pressure when in possession in first half of a performance that was more low key than semi-final. Claimed a huge high ball down the stretch which led to Richie Hogan point. 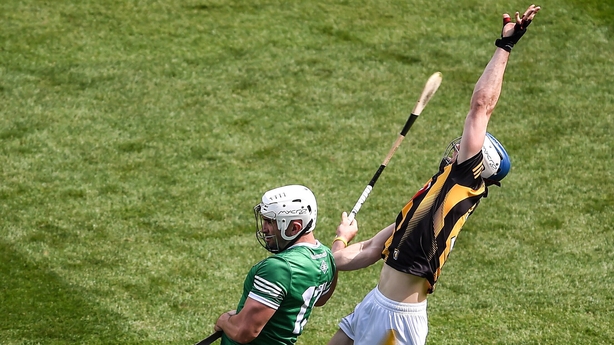 Good battle with Aaron Gillane, which might have been deemed a draw. Used his body to block a Hegarty goal-bound shot. 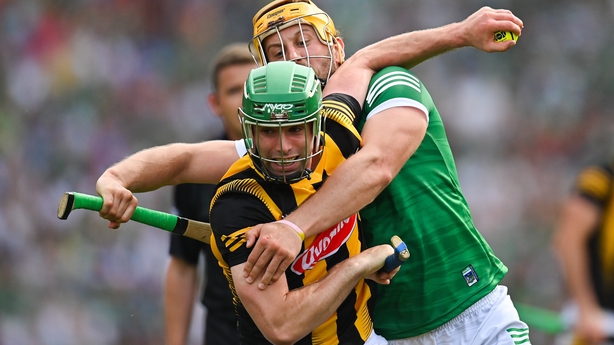 Another defender who had very little time on the ball but came out with a couple of big possessions as Kilkenny fought back in fourth quarter. 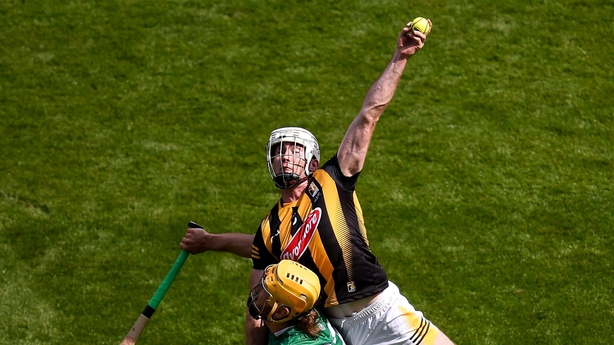 Strong first half showing. Claimed a Nicky Quaid puck-out to set up an Eoin Cody score. Strong coming out with possession. Won some frees and made a great tackle on Hegarty to prevent a point. 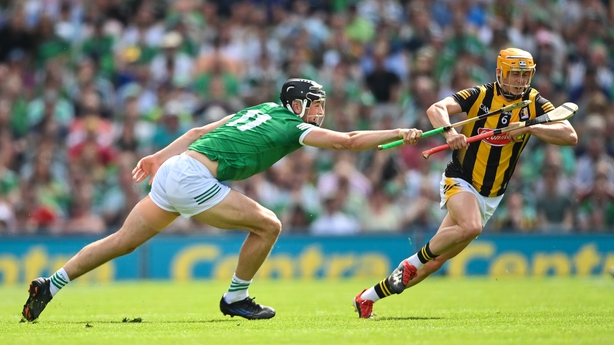 The centre-back couldn't stop Gearóid Hegarty for his early goal. Scored a great point when claiming a Quaid puck-out. Battled for everything, as shown by super tackle on Kyle Hayes. Got through a mountain of work. 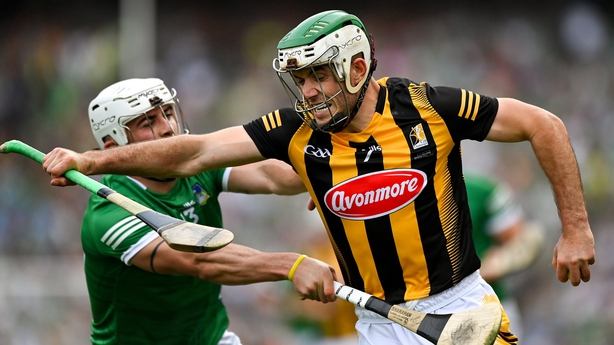 He was everywhere. Struggled to cope with Hegarty's strength. Another scoring half-back. Shame to see him catch a Quaid puck-out and then pass to Hayes. Redeemed himself with point after good work by Carey and TJ Reid and another from a further TJ assist. Important block on Hegarty in second half. Fouled Hayes in closing minute, which allowed Gillane make it four-point game. Midfield somewhat bypassed as the half-back lines dominated and was withdrawn at half-time. 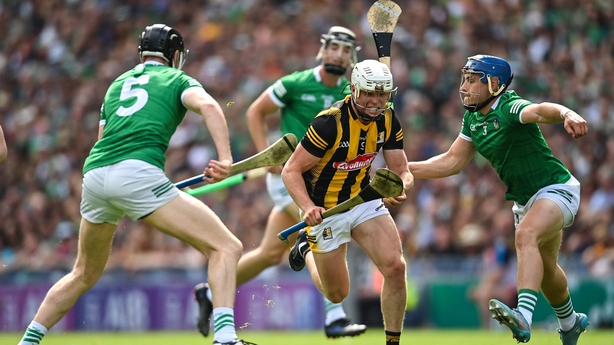 Had to go off to have a head wound tended to in first half. Made way for David Blanchfield in second half as he struggled to make an impact. 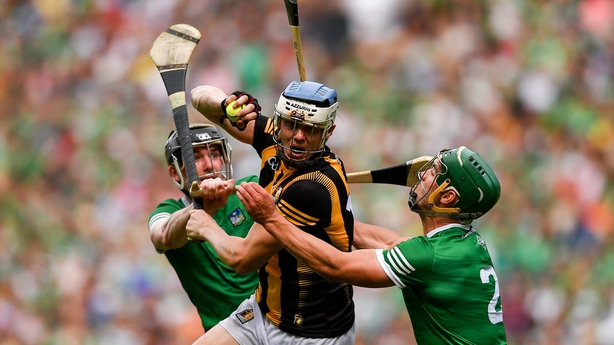 One uncharacteristic wide at end of a characteristically influential first half. Six frees before the break and some wonderful assists and high-fielding. More of same in second half, setting up Mullen and then scoring two big frees before hour mark. Could have done very little more. 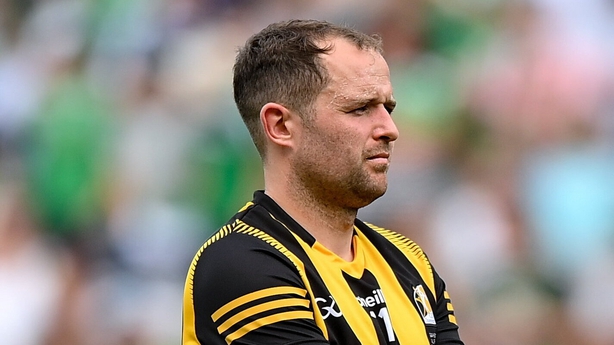 Found some space as Limerick held their shape. Two quick-fire points at end of the first half, showing quick reactions for the first. Poor wide in second half after good work my namesake Walter. 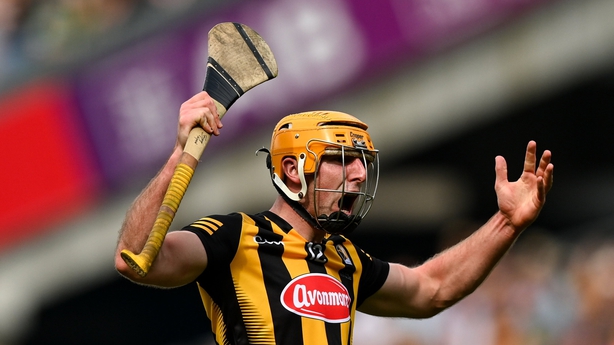 Goal at start of second half ignited the match as he showed composure to finish from close range. After a quiet first half he won a free on the stroke of half-time, which Reid converted. 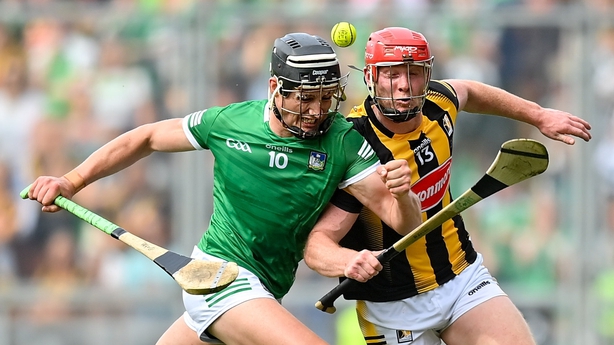 Another man who Limerick somewhat struggled to pin down. Beautiful score from tight angle on the hour to bring Kilkenny within one to add to a couple of fine first half scores. Disappointing wide with game in the melting pot. 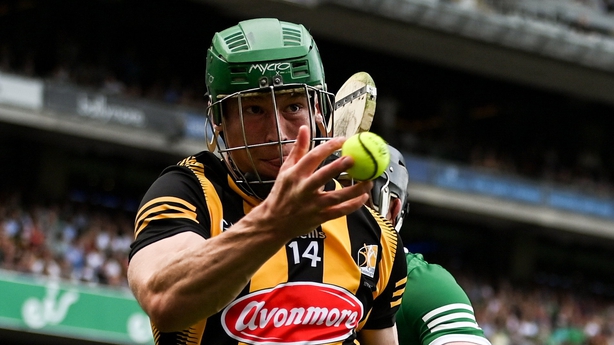 Great touch and finish for 47th minute goal and clever play for Ryan's goal. Was living off scraps as not too many chances coming his way but did score a 14th minute point after long ball from Eoin Cody. Did well to get out in front of Mike Casey to win 33rd minute free. 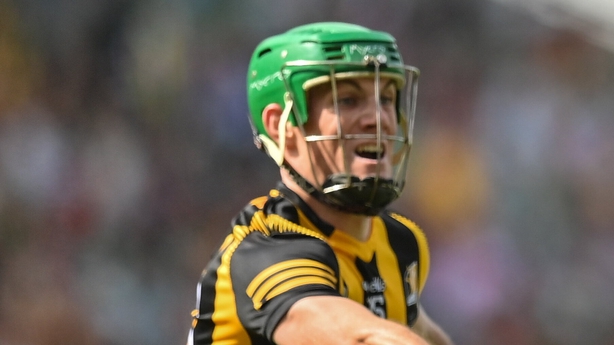 Got an early settler but did not have the influence he or Kilkenny would have hoped before his clever one-touch pass to Keoghan for Kilkenny's second goal.

Scored with his first touch and troubled the Limerick defence. Coughed up vital possession in closing moments when bottled up by four Limerick defenders.

Set up Hogan's point and added one of his own from midfield.

Made his return to inter-county fold with a typically stylish score.

Scored a point to make it a one-score game.