The outcome may have been expected, but Cork's passage into the All-Ireland SHC quarter-finals was far from straightforward at Corrigan Park as it took a huge second half from Kieran Kingston's men to put Antrim to the sword.

The hosts led by one at the break and had it not been for some poor finishing and slips in defence to gift Cork scores, that margin could have been greater and wouldn't have flattered them.

However, let superbly by Darragh Fitzgibbon in the second period and with Robbie O'Flynn and Conor Lehane in fine form in attack, the Rebels opened a gap and managed it down the stretch and while they were value for the win, 1-02 in stoppage time gave this game a lopsided look when it was anything but.

While Seaan Elliott nudged Antrim into an early lead, Cork had goal on mind for the off and five minutes in they got in when Tim O'Mahony pounced on a drop by Conal Cunning to make a beeline towards and his pass inside went all the way through to Darragh Fitzgibbon to finish.

Antrim were not fazed by this and hit back in kind shortly after as Ryan Elliott's long puc-out was fetched by James McNaughton who raced in and blasted beyond Patrick Collins.

Cork were keen to put their stamp on this game and straight away, O'Mahony again found himself through with David Kearney healing him back outside the area with a goal chance deemed to have been prevented as referee Liam Gordon awarded a penalty, but only yellow to Kearney, with Conor Lehan despatching to the net.

Antrim were looking a little shaky in defence and while Robbie O'Flynn clipped over the first of his four first-half points, the Saffrons grew into the gamer with McNaughton leading the way superbly although Elliott had to be alert to deny Lehane a goal with a save out for a 65 that was converted by the Midleton man.

On 23 minutes the hosts roared right back into this game with Michael Bradley feeding Keelan Molloy who stepped inside to find the net and put the hosts just one off the visitors, and they began to exert control with Neil McManus clipping over a sideline, yet chances went a begging in the swirling wind that was sending shots off to the right. 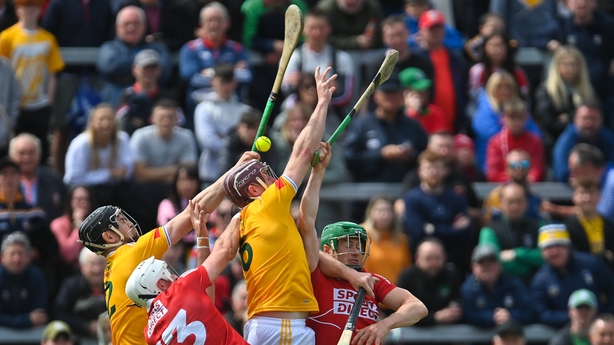 Still, they were growing in confidence with the home crowd finding its voice as McNaughton, Molloy, Cunning and Paddy Burke found their range to edge the hosts ahead.

A pair of O'Flynn scores tipped the balance back Cork's way, but Antri finished the half well as Molloy levelled and McNaughton landed a free to put them 2-11 to 2-10 ahead.

The hosts just couldn't hit the same heights in the second period despite Keelan Molloy scoring a beauty on the run after Seamus Harnedy pointed for Cork within seconds, as Darren Gleeson's charges were to mainly rely on James McNaughton frees as Cork began to pull clear with Darragh Fitzgibbon exerting a greater control on this game as the minutes ticked by, clipping four points and having a hand in many more.

Lehane, O'Flynn, Harnedy kept the board ticking, while at the other end, Cork kept the door shut as Antrim just didn't have the same room.

The hosts were just six adrift as the game moved into stoppage time, but Fitzgibbon and a second point from Patrick Horgan off the bench made it safe, while the coup de grace came with the last play as Jack O'Connor made a great run along the left and played inside to Harnedy who wrapped up the victory for the Rebels who now face Galway in next week's quarter-final. 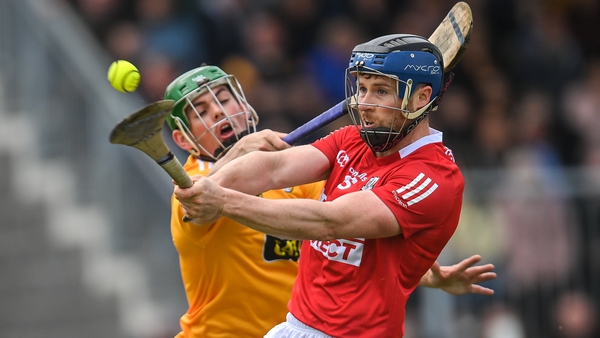 Recap: Cork and Wexford through to quarter-finals