Both games available on GAAGO. Highlights on The Sunday Game, RTÉ2, 9.30pm.

A bright and breezy day is expected on Saturday with long sunny spells and scattered showers. Highest temperatures of 16 to 19 degrees in a fresh southwesterly breeze. Mainly dry overnight with clear spells. Lowest temperatures of 6 to 8 degrees with moderating westerly winds. For more see met.ie.

Eight teams remain in the hunt for Liam MacCarthy, but come 4pm on Saturday, that will be whittled down to half a dozen. Should either Antrim and/or Kerry be among those six, we will be entering major upset territory.

Fresh from their Joe McDonagh win, the Saffrons host Cork in Corrigan Park. Throwing in at the same time in Austin Stack Park will be the meeting of Kerry and Wexford.

The Rebels and the Yellowbellies start as overwhelming favourites to progress to the quarter-finals a week later and if results continue under expected lines (one bookmaker has Cork 50/1 on, Wexford 66/1 on), it would mean Henry Shefflin's Galway would look to get back on the horse from their Leinster final defeat against Cork, with Wexford earning a shot at a rejuvenated Clare.

Still, Cork’s form has been patchy to say the least while Wexford, their do-or-die win over Kilkenny aside, have promised far more than they have delivered.

On the face of it, if one was trying to identify the preliminary quarter-final more likely to produce a shock, there is a strong argument to be made that the fixture at Austin Stack Park could provide it.

Darragh Egan has seen a little bit of everything from his side in Leinster. There was a creditable comeback against Galway to salvage a draw, a ruthless streak in putting Laois to the sword, a first championship defeat to Dublin in six years, a real off-day at the office in the share of the spoils with Westmeath before they concluded with a morale-boosting win over Kilkenny.

Dress it up whatever way you like, they have been below-par for the majority of their championship campaign to date and the surprise draw against Westmeath in particular – notwithstanding the fact it was a last-gasp goal that secured a draw for the underdogs – will give the hosts grounds for belief.

In Division 2A this year, Kerry and Westmeath finished on six points apiece, Westmeath advancing to the decider by virtue of their six-point win in the group stage.

And Kerry will also be buoyed, to some degree, of their early season win over Tipperary in the Munster Hurling Cup. Yes it was an experimental Premier side on a heavy sod in January, but it was evidence that the Kingdom can profit if the opposition aren’t at the races.

Kerry manager Stephen Molumphy will have some regrouping to do following their Croke Park defeat to Antrim, and indeed he spoke like a man suggesting this game was something of a free hit.

The former Waterford player has introduced 18 new players into the panel this year and while a third successive Joe McDonagh final defeat doesn’t have a good ring to it, a whole batch of new players have gained Croke Park experience, while the likes of Podge Boyle and Shane Conway – plus brother Jordan if his 2-02 the last is enough to secure a starting berth – could cause Wexford a few headaches.

He is realistic to know that a repeat first-half performance against the Yellowbellies will result in a long day at the office, and even if Wexford fail to get out of second gear, Rory O’Connor has the ability to keep the scoreboard ticking over nicely on his own.

Kerry will be looking to preserve a 100% championship record against Wexford in championship hurling, though it’s more than 130 years since the sole previous meeting of the counties.

That in 1892 for the previous year’s All-Ireland final, when Kerry (represented by Ballyduff) pipped Wexford (Castlebridge) by 2-3 to 1-5 after extra-time, with the sides initially deadlocked on 1-1 apiece, the last-ever 21-a-side championship game.

A repeat result is most unlikely, but Molumphy and co will be doing everything in their power to show they are moving in the right direction as they bid to ultimately dine at the table of the Munster championship.

Wexford’s last two outings – Westmeath and Kilkenny – show how wildly their form lurch from one game to the next, but all things being equal, should progress through to face the Banner.

Cork and Antrim lock horns for the first time in the championship since 2010, when Antrim, buoyed by their defeat of Dublin in the previous round, still came up nine points short with a place in the All-Ireland semi-finals at stake.

Previous to that was the 2004 quarter-final meeting, when Cork dispatched the Saffrons en route to All-Ireland glory, though matters off the pitch are remembered as well as anything that took place on the Croke Park turf, brilliantly recalled here by Niall McCoy.

Fast forward 20 years and few outside the Antrim camp are expecting anything other than an away win at Corrigan Park, where both sides come into the contest on an upward curve.

Darren Gleeson's side endured a challenging league campaign. Five losses from five was their lot in 1A, with the basement battle against Laois going the way of the O'Moore County by the bare minimum.

Digging a little deeper however, aside from the trimming at the hands of Tipp, Antrim were more competitive against Dublin, Waterford, Kilkenny, pushing the Dubs and the Déise all the way.

The Joe McDonagh allowed them rediscover the winning feeling again, the final group game defeat to Kerry at home the only blot on their way to a second win in the competition in three years, with Ciarán Clark and Conal Cunning prominent on the scoreboards.

How they fare against the Rebels will be more down to which Cork shows up.

Kieran Kingston’s side were well and truly beaten by Limerick and Clare in the opening two rounds of Munster, but the backs-to-the-wall win over Waterford and final day success over Tipperary has them still in the mix. 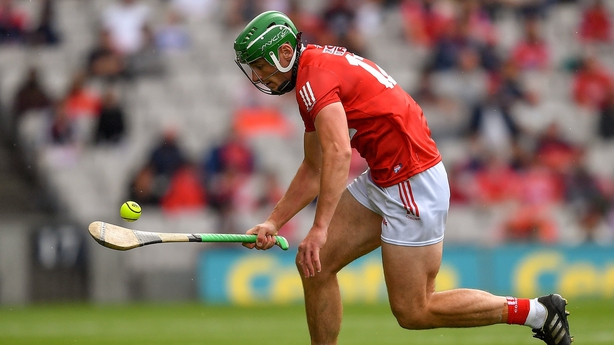 Ciarán Joyce is growing into his role at senior level, Mark Coleman has looked more comfortable back on the wing, while Robbie O’Flynn - pictured above - has arguably been Cork’s most consistent performer to date.

Doubts remain over the spine of their defence and work-rate in attack, while midfield dynamite Darragh Fitzgibbon has flitted in and out of games. Some observers feel the collapse of Waterford in the championship and Tipp’s horror showing in the province clouds Cork’s 'achievement’ in pinching third spot.

Until Kieran Kingston’s men produce a performance against an All-Ireland contender, and ideally in a knock-out game, those questions will remain in place. That is for another day.

With Galway awaiting in the quarter-final and Limerick sitting pretty on the same side of the draw, the Rebels would be long shots to make back-to-back All-Ireland finals, but a decent showing and a comfortable win would be the ideal start to the All-Ireland series.