Kyle Hayes and Aaron Gillane hit first-half goals as Limerick dismantled Cork by 11 points at Pairc Ui Chaoimh in the opening round of the Munster SHC.

The reigning All-Ireland champions, who rejigged their weaponry due to injury issues, rode out an early storm and underlined their dominance by winning the final 30 minutes by 16 points to five.

It sets Limerick up for a top-of-the-table provincial clash with Waterford next weekend, with John Kiely's side dismissing any doubts arising from an indifferent league campaign.

Initially, Kieran Kingston’s Cork scorched out of the blocks and fired in a goal within a matter of 12 seconds.

Shane Barrett won a break from the throw-in, put Conor Cahalane into space, and he then transferred to Shane Kingston to blast to the net from 14 yards.

It's a dream start for Cork as they hit the net just second into their clash with Limerick, thanks to Shane Kingston. Highlights on #sundaygame at 9.30pm, the match is live now on @rte2 and @rteplayer pic.twitter.com/r4QVMSXUqD

Limerick have been through the mill on many occasions during Kiely’s six seasons and, though Conor Lehane and Barrett extended the deficit to five, there was no Treaty panic.

Four missed chances in a row were quickly forgotten as a hat-trick of Diarmaid Byrnes points (two frees) and a Barry Nash white flag levelled matters by the tenth minute.

Patrick Horgan popped over his second free to put the hosts back in front, but then the frailties in his side’s defence began to show.

Limerick were winning the middle third and sending in favourable ball. Aaron Gillane had a goal attempt blocked by Patrick Collins, but shortly after the net was breached on 15 minutes.

Hayes, who had been moved to the forward line due to the absences of Peter Casey and Seamus Flanagan, scored a major reminiscent of his wonder-goal against Tipp last year.

This time, he collected the ball around 25 yards from goal, spun Damien Cahalane, and headed for the black spot before batting the ball beyond Collins.

A goal for @LimerickCLG from Kyle Hayes to put them in front in the Munster Senior Hurling Championship! #GAANOW pic.twitter.com/ErZ6lL674d

Gearoid Hegarty scored a couple and Tom Morrissey hit his first after three wides before it, while Robbie O’Flynn, Tim O’Mahony and Horgan frees kept Cork in the hunt.

Yet the flow of the game was with Limerick, and they soon pounced on a defensive mistake from Cork whose highwire act of walking the ball out of defence finally backfired.

Sean O’Donoghue had his pocket rifled, and Hayes sent Gillane into open country to blast home with ease.

A goal for @LimerickCLG just before half-time in the Munster Senior Hurling Championship! #GAANOW pic.twitter.com/vC9NhCdpcZ

Cian Lynch added a point just after as Limerick went in 2-9 to 1-8 ahead, though Lehane almost nabbed a major of his own before being crowded out close to goal.

The Rebels were on the front foot at the start of the second half also, but this time with points as they hit four in a row to gain parity.

One from O’Flynn and two from Lehane came either side of another from Barrett, but the Blarney man should have found the net.

Seamus Harnedy had centred a lovely stick pass to Barrett, but Nickie Quaid tipped his close-range shot over the bar.

As you’d expect from a Limerick side chasing a fourth All-Ireland in five seasons, panic was never on the cards as they dominated the remainder of the game.

The pre-match roars in the stadium turned to a low-level murmuring as the home supporters saw their side fade out in similar fashion to last year’s All-Ireland decider.

Byrnes took his tally to six from the half-back line, Lynch nabbed his second, while Cathal O’Neill (two) and Pat Ryan came off the bench to score.

In total, 12 different men in green got brackets after their name by the end, while Cork failed to score from play after the 46th minute. 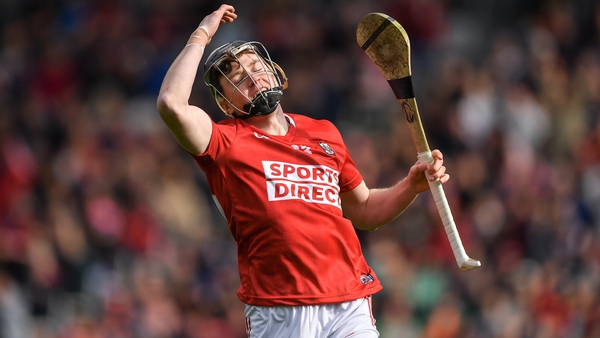