Substitute Lee Chin put an injury ravaged campaign behind him to haul Wexford to an exhilarating draw against Galway in Saturday's opening round Leinster Senior hurling championship group showdown at Chadwicks Wexford Park.

Galway were left to lament throwing away a golden chance to getting off the mark with a victory.

Lee Chin levels the match in the last few seconds for @OfficialWexGAA! pic.twitter.com/knqm9Vnztd

Indeed, while leading 1-11 to 0-8 after a wasteful first-half and remaining six points clear after 62 minutes (1-18 to 0-15), they were reeled-in by the combination of a rousing Conor McDonald goal and four late unanswered points from Chin.

It completed a stunning Wexford fight-back after they had looked all at sea during the first-half just weeks after suffering the league semi-final roasting by Waterford.

Galway bossed matters from an early stage, and only poor finishing by dead-ball specialist Conor Cooney deprived Henry Shefflin’s charges of gathering a real foothold before they pounced for a fifth minute goal.

Rory O’Connor pointed Wexford in front from a free only moments before a turnover by Evan Niland sparked a maroon and white surge as Conor Cooney put the jets on before laying off for Brian Concannon to tuck home (1-0 to 0-1).

Both goals survived scares while Galway eased ahead by 1-4 to 0-2 after 18 minutes through Tom Monaghan, Cathal Mannion, Conor Whelan and Conor Cooney (free).

And despite Galway’s wides-count reaching ten, they continued to motor as Concannon went close with a 29th minute goaling chance when he was left to settle for a point.

They maintained the thrust, stretching clear by 1-10 to 0-6 before Conor McDonald offered Wexford a lifeline when forcing a penalty.

But Mark Fanning’s resultant drive flew over the crossbar, and while Rory O’Connor quickly tagged on a similar score, a fourth Conor Cooney dead-ball had Galway in a tidy position at the break, 1-11 to 0-8.

Whatever manager Darragh Egan had to say during the interval certainly had the desired effect as Wexford returned showing much greater vigour.

O’Connor (two frees) and Oisín Foley roused the raucous local support when closing the gap to 1-12 to 0-11 after 42 minutes.

But Galway seemed to have weathered the storm after a trio of Conor Cooney scores – including two dead-balls – helped establish a 1-18 to 0-15 cushion with eight minutes of normal time remaining.

Brilliant finish to the back of the net by Conor McDonald here for @OfficialWexGAA pic.twitter.com/oXUJ7ydYct

But McDonald lit the fuse for Wexford’s recovery when collecting a long Reck delivery and lashing a ground shot to the far corner of the net in the 63rd minute.

While Monaghan nudged Galway into a 1-19 to 1-15 lead, Chin emerged as the Wexford hero, pointing a couple of frees before then narrowing the gap to 1-19 to 1-18 after winning a throw-in when Conor Cooney delayed taking a free.

A subsequent foul on Damien Reck paved the way for super-sub Chin to bridge the gap from a free just over 65 yards out seven minutes into added-time as Wexford prepare to host Dublin next Saturday and Galway are home to Westmeath. 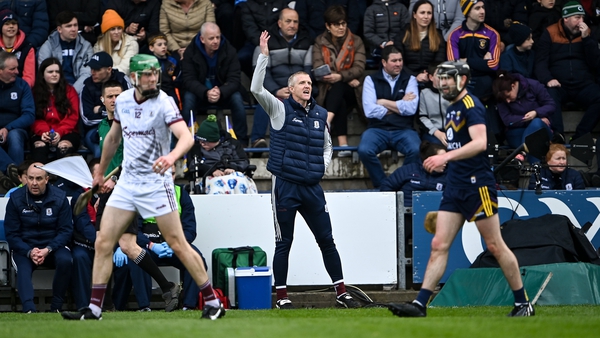