Championship status counted for little in Navan where Offaly overcame an early speed wobble to cruise past Meath and to the head of Division 2A in the Allianz Hurling League.

Trailing by a point after the opening quarter, Christy Ring Cup hopefuls Offaly looked like they may have a real battle on their hands against the Joe McDonagh Cup side.

But it was virtually all Offaly from there on as Michael Fennelly's side, who spent the winter mulling over their surprise Ring Cup semi-final defeat to Down, underlined their promotion potential with the 16-point win.

Oisin Kelly, Adrian Hynes and Shane Kinsella were all on the mark with goals for Offaly while free-taker Eoghan Cahill, who converted two sideline cuts, consistently punished Meath with 0-12 in total.

The Faithful had a dozen different scorers with all of their midfielders and forwards and veteran sub Shane Dooley getting on the mark at Pairc Tailteann.

Meath were hanging on after their relatively bright start with 38th, 50th and 71st minute goals from sub James Kelly, Mark O'Sullivan and Jack McGowan providing some consolation.

Kilkenny great Fennelly's Offaly tenure began with a league opener against Meath last year too though they were narrow two-point winners in Birr on that occasion.

That perhaps gave Meath hope ahead of their Division 2A rematch and Nick Weir's men were competitive against the Christy Ring Cup favourites initially.

Meath opened the scoring in the opening seconds through Padraic O'Hanrahan and when the same player pointed again just before the first water break, the hosts led 0-06 to 1-02.

Offaly were wasteful early on, drilling wide after wide and were grateful for Oisin Kelly's first minute goal when he rose up to flick home Leon Fox's long delivery. 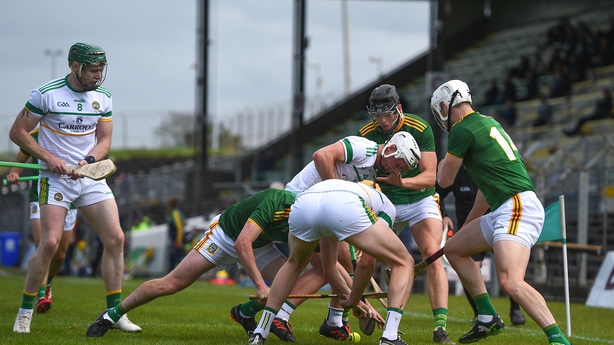 Offaly drilled 11 first-half wides in total but the majority of those were in the opening quarter and they dominated the second period of the first-half, reeling off 1-11 without reply at one stage.

It was one way traffic from the men in their change strip of all white and the sense that the water break had sapped Meath's momentum was strong.

Meath goalkeeper Charlie Ennis initially blocked Oisin Kelly's shot but Hynes was on hand to flick in the follow up.

It was a deserved goal at the end of a flowing move upfield that also involved the influential Ben Conneely.

Offaly powered on for score after score and Brian Duignan, son of county chairman and two-time All-Ireland winner Michael, curled over a beauty from the left wing.

Brian Watkins boomed over a long range score too and the visitors were deserved 2-13 to 0-07 leaders at half-time.

Offaly dominated the third quarter with another burst of scoring, 1-04 without reply this time to put the game effectively to bed.

Cahill lit up the afternoon with two sumptuous points from sideline cuts on the terrace side of the ground.

Kelly fired in a fine solo goal for Meath but their second goal from O'Sullivan was fortunate as his shot bounced in off Offaly sub Damien Egan.

Jack McGowan grabbed a third goal for Meath late on but the game was well and truly up at that stage with Liam Langton sniping a series of points for the 1998 All-Ireland winners throughout the second-half.