All the drama and decisive moments of this Division 2A opener was packed into a two-minute period at the start of the second half when Kerry flipped a four-point deficit into a three-point lead to stamp their delayed dominance over a Down team that threatened a shock in the first period.

The home side had trailed by five points after 35 minutes, pulled it back to a two-point game at half time (0-11 to 0-9) and fallen 0-13 to 0-9 behind when the game was blown wide open by goals from Maurice O'Connor and Fionan O’Sullivan in a a 60-second spell.

Moments after Down free-taker Paul Sheehan scored the only one of his 11 points from play in the 40th minute, Kerry’s Shane Nolan and captain Daniel Collins were denied goals by some courageous Mourne defending, but even at that Kerry smelled blood.

O’Sullivan tidied up with a point before O’Connor was played through and the Kilmoyley man finished neatly past Stephen Keith for the game's first goal.

From the puck-out Kerry drove forward again, and when O’Sullivan broke clear of the Down defence, his follow up shot found the net after a smart initial save from Keith. The only shame for Kerry was that there were no supporters in Stack Park to marvel at the turnaround.

It was less a case of what manager Fintan O’Connor said to his team at half time, and more about what he did.

The changes Kerry made were simple but effective. Midfielder Nolan went to the inside forward line, Mikey Boyle (pictured below) came out to midfield, and centre-back Barry Mahony was given licence to push forward more. It was a lubricant that loosened the whole team up. 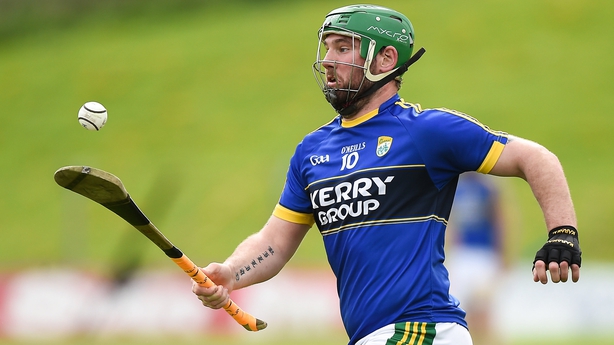 The first half had been exactly what one would have expected after a near six-month lay-off: first touch was a fraction off, speed of foot and mind was a second off, accuracy was a metre off.

Across all those metrics, however, Down were a little closer to the right number, and from Sheehan’s third minute converted free they were never behind until the 41st minute.

The surprise, then, was the nature of Down’s collapse as soon as Kerry found their groove, and despite coming to Tralee as Division 2B champions, the Mournemen will find the air a little more rarefied at this next level up.

Sheehan converted four frees and three '65’s in the opening period, which was a fair reflection of Down’s slight dominance in the first half, as Kerry struggled to knit their passes together and make the ball stick in the inside forward line.

The Kingdom looked – and were – in trouble when they slipped to that 0-11 to 0-6 deficit after 35 minutes but additional time scores from Collins, Boyle and Maurice O’Connor were crucial to keeping them in touch at the break.

That early brace of goals fired the Kingdom’s confidence, and when O’Connor flicked his second goal in the 46th minute Kerry were coasting, 3-12 to 0-13, and they led by 11 at the second water break.

There was late injury and insult: the former coming with a bad looking hamstring injury to Kerry forward Brandon Barrett; the insult in the former of a last second penalty against Down which Nolan dispatched down the centre to give Kerry what might be a value winning margin in what is expected to be a division of tight margins.