By Ronan Fagan at Croke Park

While fireworks were popping in the skies around the stadium, there was no such entertainment on the pitch, although there was the suggestion of a riveting contest unfolding after Wexford fought back to parity on 0-07 apiece after 18 minutes.

But Galway returned after the first drinks break with a defining purple-patch to lead 1-13 to 0-10 at half-time, and Wexford appeared completely devoid of methods to resurrect their ambitions as the Tribesmen ultimately inflicted a nightmarish Halloween trouncing for the 2019 champions.

Davy Fitzgerald certainly has a job on his hands to try to usher a response from Wexford in the All-Ireland qualifiers.

Galway boss Shane O’Neill, meanwhile, should be encouraged by this ruthless display as the maroon face into the 14 November provincial decider against Kilkenny.

But the new man at full-back finished the game on the ground holding his shoulder after a heavy fall, and he left the field in some discomfort, sparking concerns for the Kilkenny test.

Both sides were returning to competitive action for the first time in 237 days after Covid-19 delays.

But Galway showed no ill effects of the lay-off as they zoomed clear by 0-04 to 0-01 inside five minutes courtesy of Brian Concannon, Seán Loftus, Joe Canning (free) and Conor Whelan.

Wexford quickly acclimatised to draw level four times by the first water break after 18 minutes, with Lee Chin, who was generating lots of problems, converting three frees to inject some intrigue (0-7 each).

But after Galway full-back Fintan Burke traded points on the restart with Paul Morris, the Westerners struck a purple-patch between the 23rd and 30th minutes to charge clear by 1-12 to 0-8.

Canning put over a free from his own '45 in the calm conditions while adding a '65 after his effort on goal direct from a close-range free was blocked on the ‘line by a defender.

But the Wexford goal was breached in the 30th minute when the lively Concannon fastened onto a break inside from a long distance free by Canning and rattled the Canal-end net for a seven-point lead. 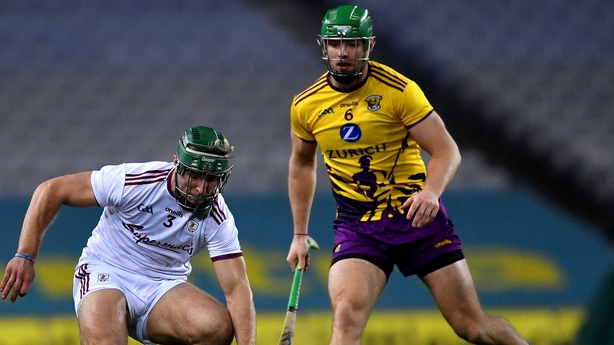 Paudie Foley and Lee Chin pegged back Wexford points, while a goaling threat by defender Matthew O'Hanlon was thwarted as the reigning champions hit the change-of-ends adrift by 1-13 to 0-10.

But Galway continued to flex their superiority as Jason Flynn and midfielder Johnny Coen added their names to the scoresheet to help open-up a 1-17 to 0-13 margin after 44 minutes.

Wexford’s desperation even saw them experiment with full-back Liam Ryan in an attacking role for a brief spell. But it proved to be in vain as their evening never brightened and they succumbed to their first defeat in Leinster since June 2018 with lots of soul searching required if they’re to make a meaningful riposte.