Tipperary champions Borris-Ileigh caused a major shock with an awesome, defiant display to defeat  favourites Ballygunner by a single point in the Munster Hurling Club final at Pairc Uí Rinn.

The floodlights were on from the start in Cork with little to separate the sides in the opening quarter.

The teams were level on five occasions in all in the opening half in front of an official attendance of 2,663.

Three points in succession from Dessie Hutchinson (2) and Paddy Leavy gave the reigning champions the clear advantage on the scoreboard to lead 0-08 to 0-05 approaching the break.

First-half injury-time points from Conor Kenny and Pauric Mahony kept the margin at three, 0-09 to 0-06 as the sides went to the dressing rooms.

Borris-Illeigh had other ideas though.

A magnificent run by half-back Ray McCormack sent Kieran Maher away to shoot high to the 'Gunners net past Stephen O'Keeffe and level the game 1-07 to 1-10 with 44 minutes played. 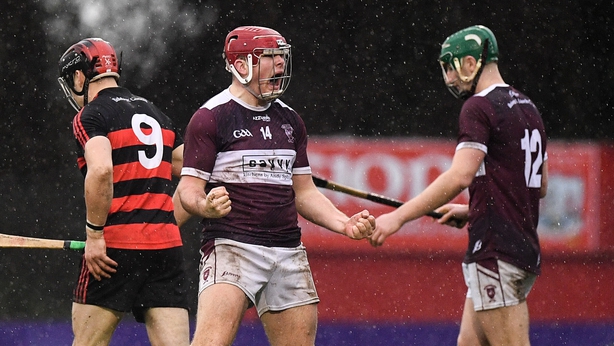 Man of the match and All-Ireland winner Brendan Maher first landed a superb point from play and then converted a close-in free to nudge his side two points clear with ten to play.

The game was now beginning to hot up considerably.

Hutchinson managed to free himself from the clutches of the Borris defence to find the unmarked Barry O’Sullivan with the perfect cross-field pass.

O’Sullivan had little difficulty in firing Gunners back into to the lead with a superb goal, 1-10 to 1-09.

The end-to-end drama continued with Jerry Kelly somehow managing to escape the clutches of his marker to level the game again.

Conor Sheehan pointed under pressure to put a now nervous looking Ballygunner back into the lead; 1-11 to 1-10 with 52 minutes elapsed.

However, Maher made no mistake to level the game from a free with the Tipp men clearly warming to the occasion on a cold November afternoon.

As the clock ticked towards full-time, Niall Kenny caught a long delivery on the 20-metre line and looked set to goal before losing possession. However referee Johnny Murphy already had his arm in the air to signal a free into the Tipp champions.

Once again Brendan Maher stepped forward and made no mistake with what turned out to be the match winning point.

Ballygunner pressed for a leveller in the three minutes of injury but defiant defending from Brendan Maher, Dan McCormack and Seamus Burke ensured that the cup was returning to Borris-Ileigh for the first time since 1986.

Waterford come good in second half to hammer Clare

Shane Bennett strikes late to give Déise the victory