A crowd of over 71,000 were treated to another thriller at Croke Park as Limerick reeled in Cork before surging clear in extra-time to reach their first All-Ireland hurling final in 11 years.

John  Kiely’s side had led 1-12 to 0-14 at the end of the first half thanks to a Cian Lynch goal in injury-time but the Munster champions upped the gears after the break and Conor Lehane’s green flag helped them to ease five clear by the 64th minute.

Cork looked to be home and dry but Limerick scored six points on the trot and took the lead with 30 seconds of injury-time remaining. And still, there was enough time for Pat Horgan to bring the contest to extra-time from a free as it ended 1-27 apiece.

A fresher-looking Limerick carried on that momentum in the extra 20 minutes and goals from substitutes Shane Dowling and Pat Ryan ensured a place in the decider on 19 August against Galway or Clare.

Croke Park had hosted a cracking first semi-final between Galway and Clare on Saturday and these two teams seemed intent on serving up another classic from the off.

The start was fast and furious, the sides exchanging quickfire points, including one from Seamus Harnedy. The Cork captain shook off a hamstring injury to start and made a big impact in the opening period, scoring twice and setting up two others for team-mates.

Limerick took the early initiative and could have had a goal but Aaron Gillane kicked his second point instead when through on goal after losing his hurl.

That put the Treaty men two ahead but Cork responded with the next four scores through Harnedy, Shane Kingston, their energiser bunny Daniel Kearney and a long-range effort from Mark Coleman.

Gillane had a second goal chance, bizarrely identical to his first as he again dropped the hurl, but this time he dragged his kicked effort badly wide.

With half an hour on the clock, Cork were two up, 0-10 to 0-08 but Graeme Mulcahy scorched his name onto the scoresheet with three points from play in as many minutes - either side of Horgan flicking a loose ball just over when Kearney’s speculative shot came back off the post.

Watch the full highlights of another All-Ireland SHC semi-final cracker tonight on The Sunday Game from 9.30pm https://t.co/y1qinfr2TD #RTEgaa pic.twitter.com/0nbQEe48aV

Coleman matched the feats of Joe Canning and Tony Kelly by cutting a sideline ball wonderfully over the bar and Cork, after Shane Kingston drew a great save from Nickie Quaid, were cruising to half-time with a two-point lead when disaster struck.

Seamus Flanagan looked up when penned in in the top-right corner and picked out the run of midfielder Lynch with a perfect short pass. Lynch lashed the ball past Anthony Nash and into the net for a slender half-time lead that would have left Cork feeling hard done by.

Cork came back out with intent, Darragh Fitzgibbon twice piercing through from midfield to score as they drew level within five minutes of the restart.

Lehane had had little influence in the opening 35 but he came to life now, scoring two from play in quick succession while Horgan continued to convert frees.

In the 52nd minute, Dan Morrissey put up his hand to claim a puck out but it squirted from his grasp and Lehane was through in a flash, burying the ball into the top corner from the right edge of the large square.

Lehane made it a six-point lead – 1-24 to 1-18 – shortly after and Kiely sent for the cavalry: Na Piarsaigh duo Peter Casey and Shane Dowling entered the fray.

Dowling made an immediate impact, scoring twice from play, but the gap was still five with just six minutes of normal time to play.

Lethal! Conor Lehane nearly bursts the net with a scorching finish for Cork.

Cork were sitting deep now though and were unable to escape their own half in the face of a relentless green wave.

Kyle Hayes, two frees from Gillane and Dowling again cut Cork’s advantage to the minimum before Gillane tied it up with his fourth point from play.

Four minutes injury-time. Quaid came off his line faster than Usain Bolt to deny Seamus Harnedy what would have been a match-winning goal with a superb flicked clearance.

Another Gillane free edged Limerick in front but with seconds left Lehane won a free on the 65 and Horgan made no mistake. For the second day in a row we had a 90-minute semi-final.

As it was on Saturday, the first extra 10 minutes was sluggish and low-scoring. A single Horgan free for Cork; Gillane blazed over with the goal at his mercy and converted a dead ball.

Limerick took their chances in the second extra period. The superb Dowling was pushed by Mark Ellis as he bore down on goal and dispatched the penalty himself to the net.

Cool as you like, Pat (Le Tissier) Ryan lobs to the net and Limerick are heading for the All-Ireland SHC final

Three minutes later, sub Pat Ryan chased a ball into the corner, outpaced Damien Cahalane and flicked the ball over the onrushing Nash and into the net. 3-30 to 1-29 now.

Subs Barry Nash and David Reidy added insurance points and by the time Horgan’s long-range free sailed all the way to the net, there was such little time left that the Cork fans barely celebrated.

They knew they were exiting at the All-Ireland final stage for the second year in a row, despite retaining their Munster title.

For Limerick, the journey continues and offers the chance to end a 45-year wait for Liam MacCarthy.

Dowling and Kiely pleaded afterwards for supporters not to get carried away with the hype.

Good luck with that. Limerick are back. 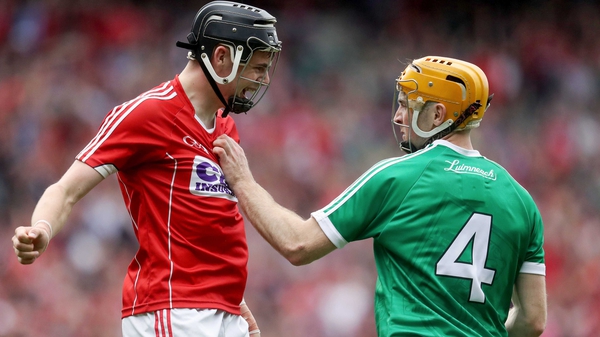 'I can't keep up with this, I need to catch my breath'