It was a case of joy unconfined for Liam Mellows after their long wait for a Galway senior hurling title ended following their victory over favourites Gort on Sunday.

The 3-12 to 1-15 success at Pearse Stadium was also a boost for hurling in Galway City which hasn't had champions since Castlegar were victorious in 1984.

Mellows, who were last county kingpins in 1970, can now look forward to date with Cuala in the All-Ireland semi-final in February.

Skipper David Collins could not hide his delight after the final whistle and had particular words of praise for his manager, the former Clare selector, Louis Mulqueen.

Speaking to RTÉ Sport, Collins said: "You could see the heart and the fight that was out there, the never-say-die attitude and I'm absolutely thrilled to be a Mellows man today.

"As for Louis, that man is a magician, I have to say.

"He brings in that whole sense of unity and teamwork. Look, you see it in the boys, the fight we showed. He eats and sleeps the game. His passion, well you can see why Clare won All-Irelands with him." 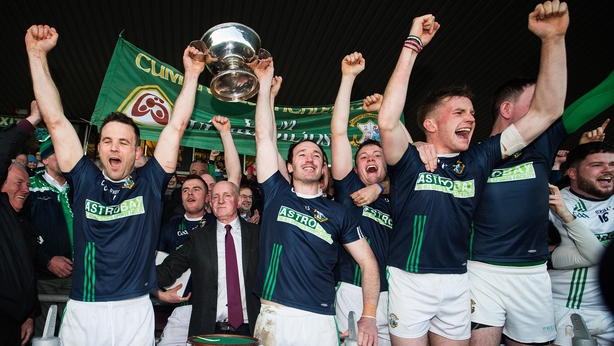 As for the manager himself, it did take some persuading from Mellows to get him involved, but in time he was convinced that their persuasion could yield something productive.

Mulqueen added: "It was an unusual turn of events. I had taken a break for a little while, but they kept pestering and pestering me.

"They convinced me that they might do something this year. I bought into the package. They are a great bunch lads who worked hard all year. To see them play well in a county final was very heartwarming.

"There is a good balance of youth and experience in the side. The players were so sincere about hurling.

"There was a famine for 47 years in that club and there was something a little bit magic. Today the magic sparked and we got three goals. It's just lovely to be part of this success."

Mulqueen was also keen to stress his side's mental resolve against a Gort side who were warmly favoured by most observers beforehand.

"We were told not to turn up today, that Gort were in five of the last eight county titles, but I was not going to let that seep into our team," he outlined.

"We were mentally strong. We took our goal chances today which ultimately was the difference between the two teams."