Evan Niland was imperious for Galway and landed nine points as they lifted the All-Ireland minor title for the tenth time with a six-point win over Tipperary at Croke Park.

The Clarinbridge clubman was their star with eight frees and their third-quarter burst was the difference in the end.

Niland finished the season with a championship haul of 0-31 as Jeffrey Lynskey’s men started the day off perfectly for the men from the west.

It was 1-07 to 0-10 at half-time, Galway’s first goal came courtesy of Brian Concannon.

But, they ran Tipp ragged on the resumption and further efforts from Liam Forde, Cianan Fahy and Michael Lynch sealed a famous win with Tommy Nolan’s 1-02 in vain.

Galway won the toss, and captain Sean Loftus chose to play into the Hill 16 end, against the breeze in the opening half.

The prolific Niland hit Galway’s first, after just two minutes when he won his own free and slotted, from close range.

Niland doubled his tally in the fourth minute, but the troublesome duo of Lyndon Fairbrother and Nolan stepped forward.

Between them they hit 1-10 in the semi-final win over Dublin, and two quick-fire points from them, had Tipperary level for the first time.

Jack Coyne and Fairbrother swapped scores, before Tipperary centre-back Brian McGrath and one of their dual-stars on show, hit a ’65 to give his side the lead.

Coyne levelled however – the second time he called HawkEye into use – but Fairbrother slotted his third of the day to leave it 0-05 to 0-04 in favour of the Munster champions. 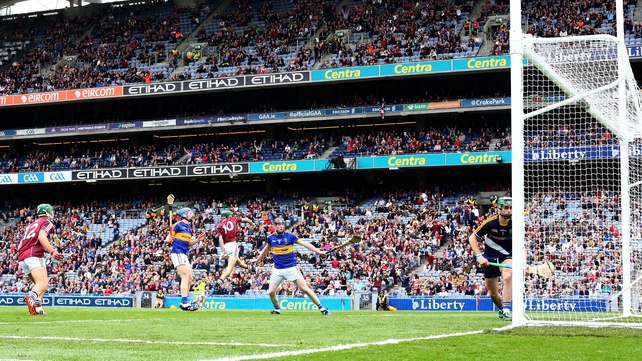 However, Concannon found the net in the 18th minute and Galway took the lead.

Coyne sent in a speculative ball, but Tipp corner-back James Quigley failed to deal with it, and it was lashed to the back of Padraic Hayes’ net.

But Tipperary showed a gritty resolve and hit back with points from Alan Tynan and Nolan.

It was 1-04 to 0-07 after 20 minutes, Niland put Galway in front, but Fairbrother and McGrath added to their tally.

Niland couldn’t miss from the placed-ball, he hit another and the hard work of Thomas Monaghan paid off with a score.

Monaghan has scored in each of Galway’s games so far this year and they led towards half-time but Fairbrother’s fourth free had the sides level 1-07 to 0-10 at the break.

But, after the resumption Galway took off, led by their full-forward supreme Niland. Quirke hit Tipperary’s two points in the opening 12 minutes after half-time but the game was nearly over as a contest at that stage.

Niland added three inch-prefect frees, while super-sub Forde who was only on the field a minute rattled the Tipp net for the second time in the 38th minute.

Galway were on a roll and Fahy’s superb third made it 3-10 to 0-11 in favour of the Tribesmen.

Quirke and Cian Darcy answered those scores but Tipp needed a goal and even when Niland began to fire wide, Galway had enough in the tank.

Galway captain and sweeper, Loftus put them eight points clear with nine minutes left in the game, Niland finished off his tally with his ninth of the day.

Nolan hit Tipperary’s goal in the final minute but the game was well up and Lynch’s late effort crowned it for Galway.