Support for club hurling in Kerry is strong but county manager Eamonn Kelly hopes that their promotion to Allianz League Division 1B will bring the fans out in force.

More used to success with the large ball, it is the hurlers of the Kingdom that are celebrating this week after a shock play-off win over Antrim on Saturday.

Next season they will take on more established hurling counties such as Clare, Wexford and Limerick in the second tier.

Speaking to RTÉ Sport after their one-point win, Kelly said: “We are now up against the big teams, which might bring along the support.

"There’s massive support for the club scene in Kerry. We don’t always get huge support. Hopefully this will give it a lift, that we’ll get a lot more support following the county team.

“We got the breaks. Credit to Antrim – they have some cracking hurlers there, they played very well. We got the goal, we thought we might push on but they came back, they went three points ahead again. We’re delighted to get the rub of the green in the finish.”

Despite the achievement, attention will now turn to the summer campaign and a meeting with Down in the Christy Ring Cup on 2 May in Austin Stack Park.

Kerry forward Colm Harty added: “We only had a six-day turnaround [from the Division 2A final win over Westmeath]. I suppose we were up against it but thank God we pulled through and got the win.

“Next year is going to be another step in the right direction, moving up another division. We can’t drop our foot off the pedal because we’ve Christy Ring coming up in summer and we’ve to keep a good focus on that.”

For the Saffrons there was only the bitter taste of defeat, their seventh in seven league games, and the sobering thoughts of third-tier hurling next spring.

Manager Kevin Ryan could not hide his disappointment.

“It’s just hard to take, that’s all. It’s seriously damaging, particularly the young lads we had a lot of faith in, having them play Fitzgibbon Cup, driving them on [but] to drop out a level, it’s obviously damaging. 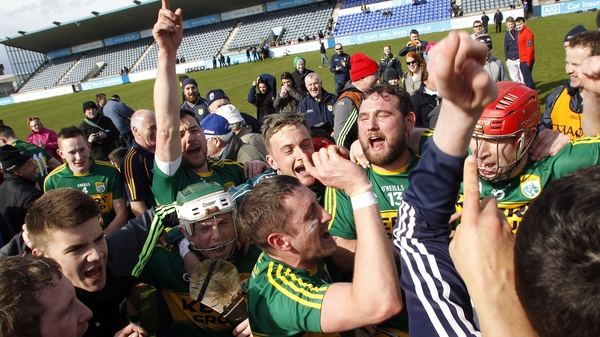