Tipperary manager Eamon O’Shea declared himself happy with the commitment shown by his players in seeing off a Galway revival to win 2-18 to 0-20 in Thurles, and insisted that Division 1A of the Allianz Hurling League could not be tighter.

Goals from John ‘Bubbles’ O’Dwyer and Seamus Callanan early in the second half had put Tipp in the driving seat at Semple Stadium, but thereafter the Tribesmen showed grit and determination to fight back to within four points.

Speaking to RTÉ Sport after the game, O’Shea praised both teams’ efforts, identifying the goals as the deciding factors.

“Two good teams, and a really difficult day to hurl,” O’Shea said. “The wind was swirling, and it was raining at times. So, it could have gone either way. We got a cushion after half-time, and it saw us over the line.”

He said Tipp’s two quick goals early in the second half had opened a gap, but praised Galway’s determination and ability to fight back, even if they ultimately fell just short.

“The wind was swirling, and it was raining at times. So, it could have gone either way" - Eamon O'Shea

“They’re a really good, competitive team, and, you know, it was nip and tuck.”

O’Shea hailed his team’s work ethic, highlighting the work of the Premier defence, in particular. He suggested the wind, and the closeness of the teams’ ability levels, meant that it was always likely to a close affair.

“There’s nothing between these in the first division. Anybody can win on any given day. That’s what makes it the competition it is.”

O’Shea dismissed the idea that Tipperary had been dwelling on their surprising opening-day defeat to Dublin, saying his side had moved on ahead of the game against Galway.

“Game to game, we just move on. The time for reflection is the Autumn.”

He said that preparations were likely to get somewhat easier now that the Fitzgibbon Cup was nearly at an end, and players could concentrate on inter-county commitments.

“We have 12 players on Fitzgibbon duty, so on any given night I’d have only 18 players. So it makes life a little easier from now on, because we’ve a full panel.” 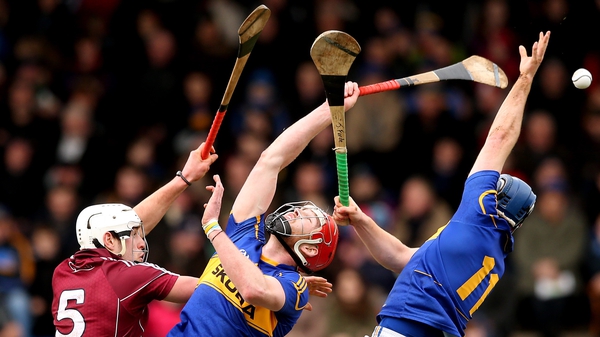