Brendan Maher says Tipperary’s All-Ireland final replay defeat to Kilkenny will stay with him for the rest of his life but the team are optimistic ahead of the start of the Allianz Hurling League.

“It’s probably something that will go with you for the rest of your life if I am being honest,” he told RTÉ Sport. “But as a player you have to look at each year as it is and 2015 is a new year for us.

“We are looking forward to games we have coming up and the start of the Allianz League is what we have at the moment so we are not thinking of it [the final], we are thinking of the next game.”

Tipp play Dublin in the first round of fixtures on Sunday and captain Maher is expecting a tough challenge from the Dubs, who are playing their first league game under new manager Ger Cunningham.

“Any time you play Dublin you always get a lot of physicality,” said Maher. “They are always highly motivated. I think they like playing against Tipperary and we have had some great battles with them over the past few seasons.

“They will be motivated this Sunday because of the narrow defeats in Semple Stadium last year in league and championship and for ourselves we can look back to 2010 - the last time we played them in Parnell Park they beat us quite comfortably so both teams will be highly motivated and that makes for a great game.”

Tipperary escaped a relegation play-off last year by beating Dublin in their final league game after losing three consecutive games. They went on to finish runners-up after losing the final to Kilkenny, as the victory in Semple Stadium ignited their season.

“It was a do-or-die game and we won so that’s as much as it is,” said the Borrisoleigh man. “We went on and contested the league final and were very disappointed not to win it.

“You can go away from different games or years and say ‘if this happened or that happened’, it was just the situation we were in. We had a run of three defeats and we had a challenge of playing Dublin and had to win that game and luckily enough we did win it.”

"Our motivation and commitment levels are the same every year. You are 100% committed and anyone who questions a GAA player’s commitment doesn’t really know what they are talking about"

The team took some flak over that early season loss of form but Maher insists the team’s commitment never wavered.

“That’s the expectancy levels and no more than ourselves: we have high expectancy levels for every day we go out. The Tipperary public in general don’t like to see the levels dropping. There is no one as critical of us as ourselves but I think you just try and deal with that as best you can.

“Our motivation and commitment levels are the same every year. You are 100% committed and anyone who questions a GAA player’s commitment doesn’t really know what they are talking about.

“It’s an amateur sport and people sacrifice their lives to play the sport they love anyone who steps out on that field to question their commitment – why would they be going out there?”

Maher was used in an unfamiliar centre-forward position by Tipperary in the Waterford Crystal Cup. Despite winning All Stars at midfield and his usual wing-back role, Maher revealed that he has played up front frequently at club level and was relishing the challenge.

“I am well used to it,” he said. “I have been moved around quite a lot over the years so [I am] used to playing in different positions.

“I have played centre-forward quite a bit for Borrisoleigh so it is not really new territory. It is new territory in Tipp but not really  for myself I have a lot of experience playing anywhere to be honest. It is a new position but I hope to be able to do a job for the team.” 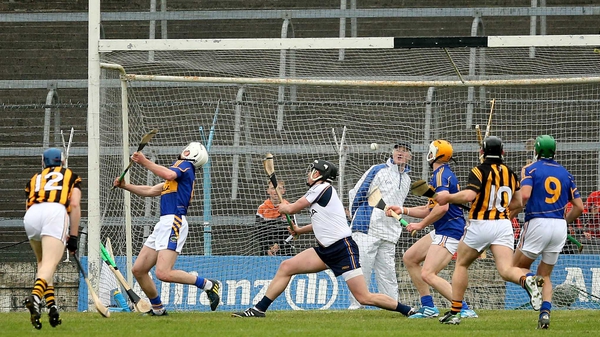