Portaferry delivered a convincing performance to deliver their first ever Ulster Senior Hurling title, with a 1-16 to 0-10 win over Cushendall at Owenbeg.

Beaten in eight provincial finals since the inception of the competition in 1971, Sean Young's charges delivered on the big stage as they became the first non-Antrim side to take the title since fellow countymen Ballygalget in 2005.

Before a crowd of 2,538 spectators, Portaferry led by 0-07 to 0-06 at half-time, but firmly opened the game in their favour on the restart, with Eoghan Sands bagging the only goal of the hour in the 47th minute, on the way to a nine-point win.

With nine provincial titles to their credit, Cushendall were favourites heading into this game, but they approached the decider with caution, having required a replay to overcome Derry champions Slaughtneil last time out.

Aiming to equal Dunloy's record 10 Ulster crowns, Cushendall opened the scoring through Neil McManus, but this was the only time that they would take the lead, as Portaferry responded superbly.

Aided by the strong display of Paul Braniff from frees, with the veteran forward slotting over four early scores, the underdogs powered to a 0-07 to 0-02 lead after 16 minutes. 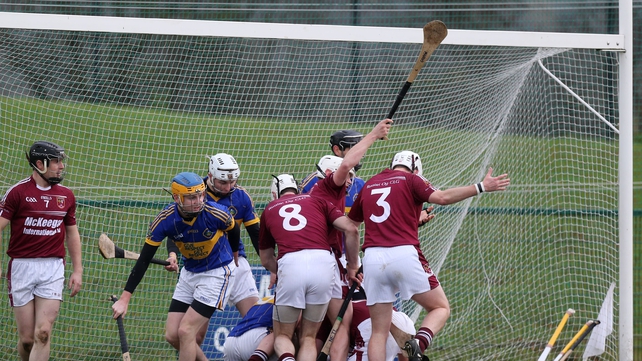 McManus kept Cushendall in touch with their second score, and after a sustained period of Portaferry dominance, the Antrim side came good in the second quarter.

Cushendall showed their experience to bring themselves back into contention and by the interval they had cut the gap to the minimum, with McManus and Eoin Laverty claiming their scores.

But a 0-07 to 0-06 score-line was as close as it would get, as on the restart, Portaferry kicked into gear.

Sands hit two superb scores from line balls on the restart and when he found the net one-handed 13 minutes from the end, following a John Convery pass, the Ardsmen had a 1-15 to 0-9 lead that they never looked like relinquishing.

Cushendall managed to outscore their opponents by 0-02 to 0-01 in the closing 13-minute spell, but this didn't tell the full story.

It was a sign of Portaferry's strong defensive capabilities in those final minutes, rather than a lack of effort by their opponents, with captain Convery, Matt Conlan and Conor Coulter shipping up well on the half-back line.

And the Maroon-clad Cushendall couldn't find the goal as Portaferry stood firm to become the first side crowned Senior provincial Club champions in 2014.

After the game Portaferry captain John Convery lifted the cup, while Conor Coulter claimed the man of the match award.