Thurles Sarsfields are Tipperary senior hurling champions for a 33rd time after an eight-point victory over last year’s winners and mid-divisional rivals Loughmore-Castleiney.

The Blues claimed a fourth title in six seasons, their first since 2012, and now move to an Munster semi-final against Clare champions Cratloe at Cusack Park in Ennis next.

Captain Pa Bourke was Sarsfields’ top scorer, managing a haul of 1-03, and Aidan McCormack and Denis Maher helped themselves to 0-05 each.

There was also a big haul from substitute Ritchie Ruth, who scored 0-04 from play after he was brought on five minutes into the second half.

Stephen Cahill claimed the man of the match award from midfield and his two-point haul was matched by Lar Corbett, who also created Bourke’s second-half goal.

Bourke was an unwitting creator of the first Sarsfields goal, scored by Michael O’Brien in the 35th minute. 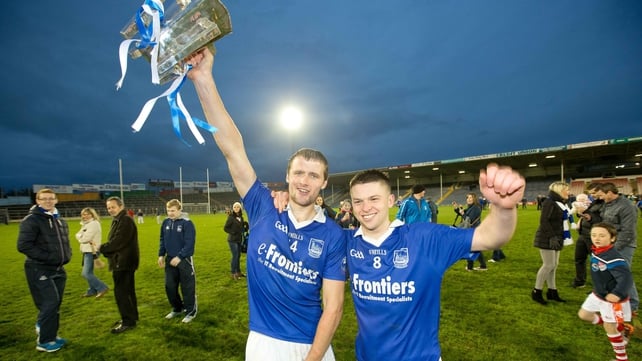 And when Bourke collected Corbett’s handpass to score a second Sarsfields goal with four minutes of normal time remaining, the gap was 12 points, 2-22 to 2-10.

Loughmore, to their credit, kept fighting until the finish as Evan Sweeney scored a consolation goal from distance.

But Noel McGrath’s underwhelming day was summed up by a penalty miss deep in stoppage time.

McGrath failed to score from play on a day when his younger brother John managed 1-01.

Cousin Liam McGrath also scored 1-01 and Sweeney grabbed that late effort but Loughmore were outclassed by a rampant and hungry Sarsfields in front of 5,751 spectators at Semple Stadium.

And it was Sarsfields who looked like they might be out of sight before half-time after soaring into a 0-08 to 0-01 lead by the 17th minute.

Bourke and Maher were showing up well in attack and the Sarsfields half-back line, marshalled by the Maher brothers, Ronan and Pádraic, was very much on top.

But Loughmore are made of steely stuff and their challenge was re-energised by Liam McGrath’s 20th minute goal, slotted low past Patrick McCormack and into the left-hand corner of his net at the Killinan End.

That strike pared the deficit back to three points and four separated them at the break as Sarsfields led by 0-13 to 1-06.

Loughmore, who played against the breeze in the opening half, would have taken as it took them 12 minutes to register a score.

But they were blown away in the second half as Sarsfields wrestled back the Dan Breen Cup from their local rivals.