Second-half goals from brothers Richie and John Power inspired Kilkenny to a 2-17 to 2-14 All-Ireland SHC final replay victory over Tipperary at Croke Park.

The Cats were crowned Liam MacCarthy Cup winners for a 35th time, with all-conquering manager Brian Cody masterminding a 10th success and Henry Shefflin picking up a 10th winners medal.

The man of the match award went to Kieran Joyce.

81,753 spectators were present to see Cody’s men pick up the silverware once again and it was the Power siblings who did the damage in a devastating four-minute spell.

Richie Power struck the first goal in the 59th minute and younger brother John, one of three pre-match changes to the starting team, pounced from close range after Darren Gleeson pulled off a save to keep out a deflected Michael Fennelly effort.

Tipperary battled valiantly all the way to the end, and when Seamus Callanan scored his second goal of the evening in the 69th minute, a grandstand finish looked certain.

But Colin Fennelly crowned Kilkenny’s win with the final score of the game as the clock ran out on Tipp, who missed their chance three weeks ago. 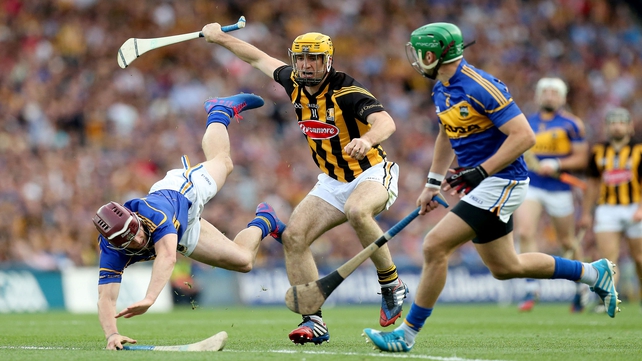 And this evening they had another penalty chance when Patrick Maher was dragged down in the second half.

But with the odds stacked against the striker, Callanan opted to put the ball over the bar for a point, 13 minutes from time.

From the start, Kilkenny went with man-marking roles on the Tipperary danger men, with Paul Murphy detailing Lar Corbett, Pádraig Walsh, one of three pre-match changes by Kilkenny, picked up Noel McGrath and Kieran Joyce, also brought into the team, kept an eye on Patrick ‘Bonner’ Maher.

Elsewhere, Jackie Tyrrell was handed the responsibility of tracking John ‘Bubbles’ O’Dwyer, Cillian Buckley was on Gearóid Ryan and on the edge of the square, the big match-up was JJ Delaney against Tipp full-forward Callanan.

As anticipated, Richie Hogan moved from midfield to centre-forward, with Michael Fennelly heading in the opposite direction.

The decisive score in the opening half was Callanan’s goal in the 29th minute.

Corbett created the opening with a break from inside the 65 metre line, and when he snapped off a hand pass to Callanan, the lethal attacker did the rest. 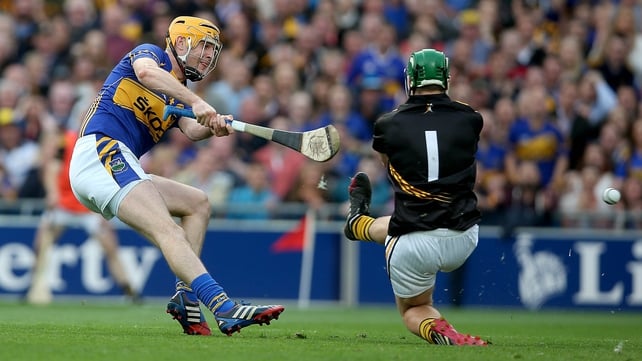 From a Tipp point of view, the timing of the goal couldn’t have been much better.

They’d endured an 11-minute barren spell on the scoreboard early in the second half but still managed to hang in grimly.

Right from the start, Kilkenny displayed huge intensity and a plethora of early hooks and blocks frustrated would-be Tipperary strikers.

But Tipp have a habit of creating space and goal chances against Kilkenny, and so it would prove again in that first half.

‘Bonnar’ Maher was crowded out in the fifth minute by the massed black and amber ranks, and Callanan was somehow hooked by JJ Delaney in the 18th minute after the Tipp forward had raced clear and looked certain to find the net.

At that stage, Kilkenny led by 0-05 to 0-04, having battled back from the concession of the opening two scores of the game to Shane McGrath, superb at midfield, and Noel McGrath, on the follow-up from that early Maher chance.

Almost 19 minutes elapsed before the first wide of the half, when Reid pulled a free shooting into the Davin End.

After James Barry fouled Colin Fennelly on the end line, Reid redeemed himself to open up a two-point gap, before the Ballyhale forward was deemed to have been in the square as the sliotar bounced into the net off Barry. 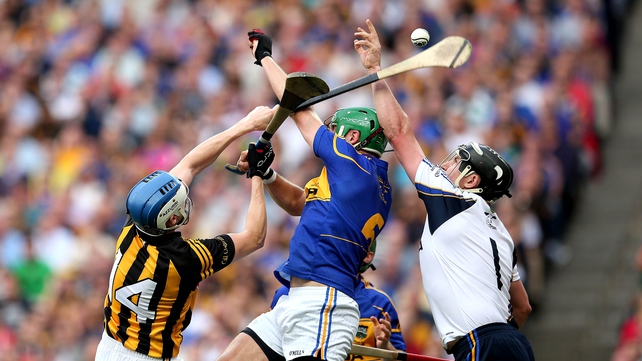 That was a let-off for Tipperary and they ended that scoring drought through McGrath in the 28th minute, a rousing individual score from 60 meres out.

Then the goal arrived. Callanan somehow squeezed the ball inside Eoin Murphy’s near post, with precious little room to work with.

The sides shared the remaining scores of the first half with Reid adding another free and Michael Fennelly, named at wing forward but operating at midfield, lofted over his second point from play.

But Tipp also kept the scoreboard ticking over as Callanan converted a free to take his tally to 1-02 for the half, and McGrath bagged his third from midfield to leave Tipp 1-07 to 0-08 clear.

McGrath was one of five Tipp players substituted in the second half as Kilkenny turned up the heat.

Colin Fennelly forced Gleeson into a brilliant 37th-minute save but Kilkenny opened the second half with intent, landing five unanswered points before Noel McGrath got Tipp off the mark.

It was temporary respite for the Munster men, who trailed all the way after Kilkenny hit the front with that five-point salvo after half-time.

Man of the Match Kieran Joyce 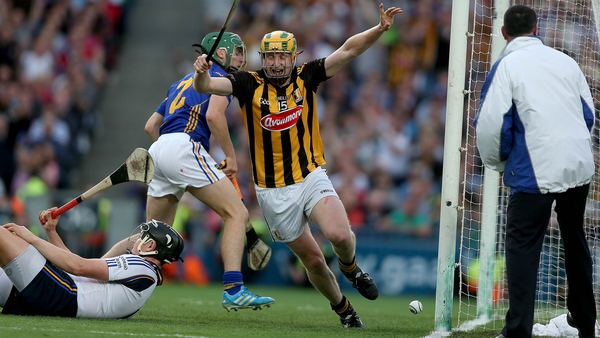