Wexford are through to the All-Ireland SHC quarter-finals after a gripping 3-15 to 2-15 over south east rivals Waterford at Nowlan Park this evening.

Almost 19,000 spectators witnessed an entertaining clash between the neighbours as Wexford edged a game that had been level six times.

The Slaneysiders, who will now play Limerick in Thurles next Sunday, were seven points clear in the second half before Waterford came roaring back to lead.

But Wexford held firm in the final 15 minutes as leading scorer Paul Morris led the way from play and placed balls.

In a smashing second half, Wexford were seven points clear when midfielder David Redmond surged forward to crack home a 41st minute goal.

Redmond’s brilliant strike opened up a 3-10 to 0-12 lead for Wexford but a brace of goals from Colin Dunford brought Waterford right back into contention.

Dunford’s second goal, batted home from close range in the 49th minute, put Waterford back in front in a seesaw battle, 2-14 to 3-10.

But Wexford were quick to regain the whip hand and after prolific forward Morris drew them level with a 50th minute point, the Ferns St Aidan’s clubman added three further points.

Stephen Molumphy responded for Waterford with their final score of the game, in the 56th minute, with just one further point converted in the final quarter of an hour.

And what a score it was from sub Ian Byrne – who lashed over a long-range point from inside his own half with four minutes left.

Despite registering a huge tally of 15 wides, Wexford held on to set up a quarter-final showdown against Limerick in Thurles next weekend.

The game had looked set for deadlock at half-time before Wexford struck for their second goal to establish a 2-09 to 0-12 lead.

Liam Og McGovern, a constant threat inside, transferred a hand pass to unmarked Conor McDonald and the teenager finished from close range in stoppage time.

That goal was a fitting end to a fine first half that was level on five occasions – including three times in the opening ten minutes.

McDonald’s point pushed Wexford ahead before Morris struck for the game’s opening goal, latching onto a pinpoint delivery from midfield before lashing a shot past Stephen O’Keeffe.

Wexford, who had scoring contributions from all six forwards in the first half, were now four points clear – 1-04 to 0-03 – but Waterford remained in touch through the free-taking of Pauric Mahony.

Wexford’s win ensures that they will now compete in the All-Ireland quarter-finals for the first time since 2008, when they lost narrowly to Waterford. 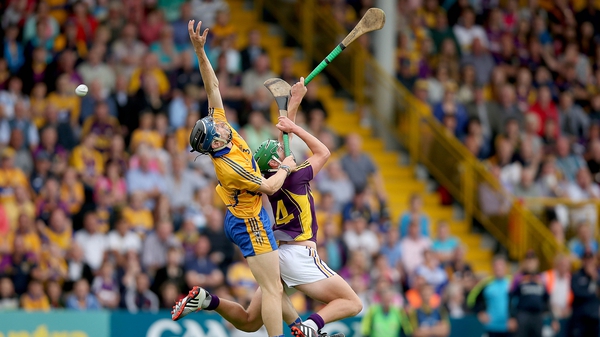