A quartet of first-half goals laid the basis for Tipperary to power to a 5-25 to 1-20 win over Offaly in the All-Ireland SHC qualifiers at a wet O’Moore Park, Portlaoise this evening.

Offaly kept in touch thanks to the brilliance of Brian Carroll (0-13) from placed balls, and although Brian Whelahan’s charges mounted a comeback on the restart thanks to a Colin Egan goal, Tipperary took control.

Offaly cut the gap to four points by the 48th minute, but Tipperary were relentless and sealed a facile victory with Callanan grabbing his second goal on the stroke of injury-time.

Having struggled for long periods in the last round against Antrim in Ballycastle, Offaly were firm underdogs heading into this encounter, and it looked early on that Tipperary were odds on for victory, as they got off to a powerful start.

In front of 9,500 spectators, the Tipperary attack caused Offaly’s rearguard huge problems in the opening stages, scoring two goals from four attacks in the opening three and a half minutes.

Callanan and Kieran Bergin both registered wides inside the first two minutes, but Tipperary quickly made amends.

90 seconds later, the scoreline stood at 2-00 to 0-00 in Tipperary’s favour after Man of the Match, Patrick ‘Bonner’ Maher cut loose to leave two Offaly defenders in his wake, including Kevin Brady, and push Tipperary six points clear.

Offaly didn't panic though and registered three unanswered points, with Carroll claiming all of their scores, including two pointed frees.

Tipperary replied, with a point each from blood substitute Denis Maher, Callanan and James Woodlock to leave the score at 2-03 to 0-03 after 14 minutes. 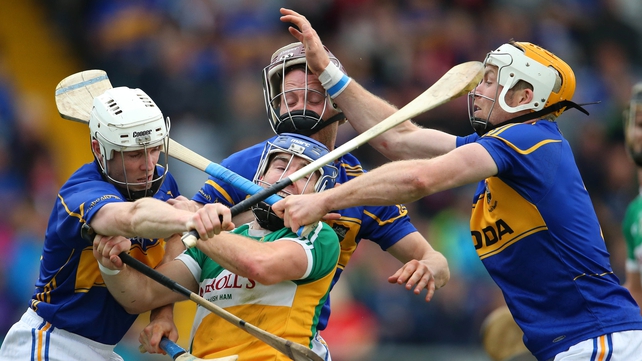 Offaly responded with four of the next six points, with fine scores from Dan Currams, Cathal Parlon and Shane Dooley in this spell.

Despite Tipperary holding a 2-05 to 0-07 lead at this stage, and indeed finishing the half with 64% of the possession, the Munster side weren’t having it all their own way.

Offaly’s strategy from puck-outs was working well, and this was one of the few areas they had dominance in during the opening 35 minutes, winning 19 of the 33 puck-outs.

A brace of Carroll points left two between the teams with 10 minutes to go in the half, but Tipperary kicked on before the interval.

Offaly only managed two further points in the opening half, with Tipperary scoring 2-04, including goals from Corbett and Callanan.

Corbett bagged his second major in the 27th minute with a powerful strike to open up a five-point lead, with Callanan’s effort after 35 minutes the result of some excellent link play by Bergin and Patrick Maher.

This margin was the biggest between the sides in this game, with Offaly mounting a strong comeback on the restart.

The Faithful County held Tipperary to just two points between half-time and the 51st minute as they battled back bravely.

Offaly found the back of the Tipperary net within a minute of the throw-in after Colin Egan flicked a Carroll free past keeper Darren Gleeson.

Carroll’s ninth point cut the gap to six points, and although Callanan and Kieran Bergin hit the next two scores, two points each from Bergin and Carroll left just four between them after 48 minutes.

4-11 to 1-16 in arrears, Offaly looked like they might drive on even more, but Tipperary came back to life.

Eamon O’Shea’s men fired six unanswered points inside five and a half minutes to restore a 10-point advantage.

Offaly kept in touch thanks to the efforts of Carroll and Joe Bergin, but Tipperary continued to stay in front.

Callanan had a chance of bagging his sides fifth goal in the 64th minute, but his effort was stopped on the line by Offaly keeper James Dempsey.

Offaly were handed little change in the closing minutes, with Callanan eventually getting that fifth goal in injury-time, to ensure a 17-point margin at the full-time whistle.

Indeed Tipperary finished the game with 14 men, having used all of their substitutes, with Callanan having to exit the field late on.