Patrick Horgan scored 2-11, all from placed balls, as Cork avenged last year’s All-Ireland final defeat to Clare with a five-point victory, 2-23 to 2-18, in this afternoon’s Munster Hurling Championship semi-final in Thurles.

28,660 spectators watched Jimmy Barry-Murphy’s Rebels advance to another Munster final showdown with Limerick on 13 July, a game that will be a repeat of last year’s provincial decider.

And while Cork may have lost out on both the Munster and All-Ireland titles in 2013, they have managed to repeat last year’s provincial victory over Clare.

Davy Fitzgerald’s All-Ireland champions will now attempt to regroup for another potential route to Croke Park via the Qualifiers.

Fitzgerald hinted afterwards that this might be a more difficult task in 2014 as his players struggled to get to grips with the pace of the game.

Perhaps an eight-week layoff from their last competitive fixture – the Allianz League semi-final defeat against Tipperary – was a factor.

But Fitzgerald also insisted that Cork were fully deserving winners – and they were – despite a free count that heavily favoured the Rebels in the first half. 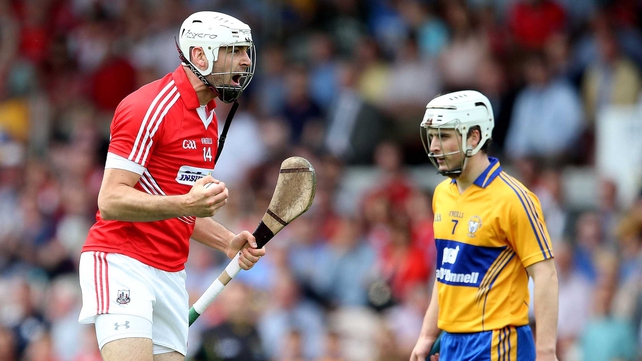 After the sides were level six times, wind-assisted Cork had a kick in them.

Two minutes before the break, Horgan went for the jugular with a free awarded a couple of metres outside the 20m line.

Horgan brought the sliotar forward a couple of metres with his lift but struck it outside the 20m line.

That score opened up a 1-12 to 0-10 advantage but there was still time for Clare to hit back before half-time, with John Conlon netting a crucial goal deep in stoppage time.

Cork led by 1-13 to 1-10 at the break and there was a mini stand-off as Fitzgerald waited for McGrath to make his way down the tunnel.

And before the second half got underway, McGrath waited in vain for Fitzgerald to emerge before eventually deciding to make his way to the halfway line to throw the ball in. 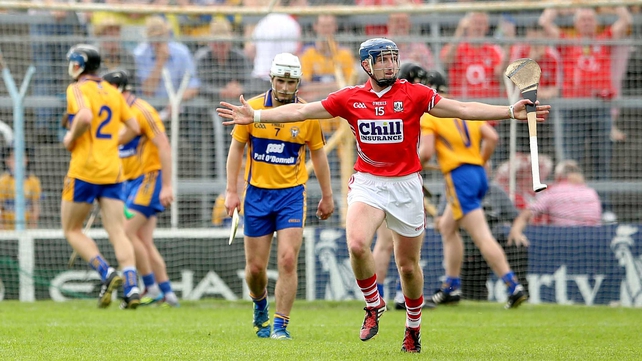 The ace hitman went for broke from a penalty and gained the ultimate reward, lashing a head high effort past Donal Tuohy, who may feel that he should have done better.

That strike established a 2-20 to 1-16 lead for Cork and two minutes later, Paudie O’Sullivan flashed over a point with his first touch after coming on as a substitute.

The tie was effectively over as a contest as Clare – playing their first competitive game for eight weeks – struggled to cope.

Since Clare’s last competitive game, Cork had come through two games against Waterford and they looked sharper and fitter all over the pitch as the game wore on.

Cork, with midfielders Daniel Kearney and Aidan Walsh ruling the roost, had the breeze from the start but the sides were level six times before Horgan put some daylight between the sides approaching half-time.

Clare were back to within two points of the winners twice in the second half but Cork held their nerve and a quick-fire brace of scores from Kearney within a minute were massive points.

Horgan’s penalty strike, buried following a Brendan Bugler foul on Seamus Harnedy, put the seal on a memorable Cork display and the Leesiders march forward to a final meeting with Limerick at Páirc Uí Chaoimh.

Substitute Darach Honan bagged a consolation goal for outclassed Clare in the final minute but the clock was against the Banner men, who will now attempt to regroup for the All-Ireland qualifiers. 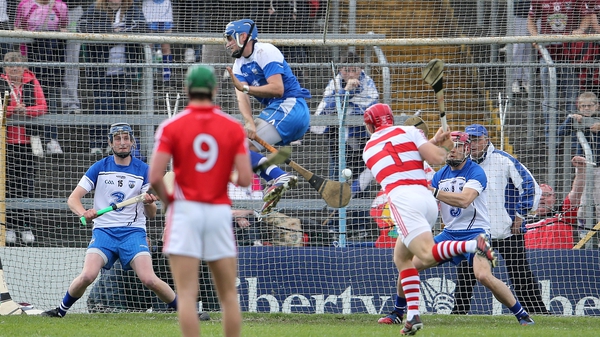