Antrim are top of the new look round robin style Leinster SHC Championship following a 0-23 to 2-11 win over Westmeath on Sunday, while London and Carlow played out a 2-17 apiece draw in Ruislip.

In Ballycastle history was made as Ulster staged a Leinster SHC game for the first time, with Paul Shiels top-scoring with 0-12 as Antrim claimed a six-point win.

In a keenly contested affair Westmeath were reduced to 13-men by full-time following second half dismissals for half-backs Aaron Craig and Tommy Gallagher, both on second yellow cards.

Brian Hanley's charges looked good in the opening stages and raced to a 0-04 to 0-00 lead early on with Niall O'Brian and captain Eoin Price registering their early scores.

The introduction of Arron Graffin in defence, with the Cushendall man returning from injury, proved to be key in turning the game in the Safrons favour, while Neal McAuley was also a lynchpin in defence throughout.

Shiels opened Antrim's account after seven minutes with the first of his ten pointed frees over the hour.

The hosts then outscored Westmeath by 0-07 to 0-02 over the next 17 minutes, to take a two-point lead, following a point from home clubman Ciaran Clarke.

Westmeath regained the lead after Derek McNicholas bagged the first of his sides two goals, and although Noel Conaty went in search of goal number two, Chrissy O'Connell pulled off a magnificent save between the posts for Antrim.

Antrim moved 0-12 to 1-06 ahead two minutes before half-time following a PJ O'Connell score and although Westmeath rallied with back-to-back scores from Ciaran Curley,

Scores were at a premium in the third quarter, with Westmeath particularly wasteful in front of the posts on the restart.
Five unanswered points between the 46th and 56th minutes handed Antrim a 0-18 to 1-09 lead.

McNicholas bagged his second goal, and Price also worked hard, but Westmeath lost composure after Craig and Gallagher saw red in separate incidents, with the hosts claiming three unanswered points in the closing minutes from Shiels to ensure a six-point win.

Earlier, at the Emerald Grounds in Ruislip, Marty Kavanagh continued to show his scoring capabilities as his injury-time point ensured a share of the spoils in Carlow's clash with London.

Despite being without a host of players through their departure from the squad at the end of last season, such as Cork native Martin Finn, Ger Hennelly of Galway and John Walsh of Laois; all of whom were influential in the Allianz League Division 2B success last year, the Exiles looked likely winners in the closing stages.

Under new boss Tommy Harrell, the hosts led by four points in the 62nd minute, but Carlow claimed four unanswered points, including Kavanagh's late equaliser to share the spoils.

London pushed on in the second half and led by seven points eight minutes after the restart, 2-14 to 2-7, but Carlow never gave up and Kavanagh slotted a dramatic equaliser two minutes into added time.

Next up Westmeath host Laois while Antrim face Carlow next Sunday in the second round of group stages games. 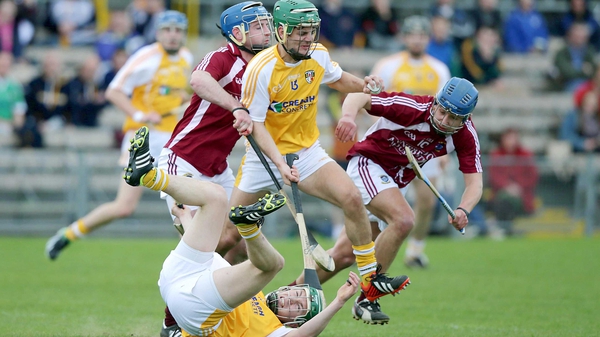