GAA President Liam O'Neill has made a commitment to set up an examination of the state of hurling following comments made
by Kilkenny manager Brian Cody about the physicality of the game.

Cody referred to a discussion document initiated by former Kilkenny star Eddie Keher which forwarded the idea of removing red and yellow cards from the game.

Speaking to RTÉ Sport, O'Neill said that it was time to take the debate into a domain other than the media.

He explained: "The debate has been opened up in hurling, started off by the comments made by Eddie Keher on his views on how he sees hurling should be run from a disciplinary point of view.

"In the last 24 hours Brian Cody has made his suggestions. We also had a view this morning from Cyril Farrell

"What I'm saying is rather than having the debate in the media and across the airwaves, why not open up a debate in hurling? I'm very willing to facilitate that.

"If people want to discuss how hurling is played and governed and how the disciplinary system works, let’s do it. Let’s do it in an open manner where everybody gets a chance to have an input.

"We'll discuss it now at Central Council. I've given the commitment to have the debate and what is the best format to have such a debate. We'll do that in the next fortnight and I would hope to get the process started as soon as possible after Congress.

"I'd like it to be a format which would give everyone who wants to input a chance to do so. I think that is the most important thing. I want this debate to be inclusive on the game of hurling and I want people to see this as the start of a blueprint for how the game will be played from here on.

"Hurling belongs to all of us and I would like to get that to the centre of people's mind when they start to engage in this debate."

O'Neill went on to talk about how hurling has evolved - and is not concerned about the risks involved in having a debate on its future now.

"People have asked for the debate now so we're going to facilitate the process. It has to be remembered that hurling has evolved.

"We once played hurling across valleys, we played it town-to-town, we played at 21 a-side, 18 a-side, 15 a-side, and we have modified the game so much to a fair extent that it is arguable that the wonderful year we had last year was the end of a evolutionary process in hurling.

"There is nothing in life as certain as change happens, so let the debate happen. If we don't want to change now, that's fine with me. Let people who haven't had a voice in this have their voice. Let’s see what the consensus is, but there will be no change without a consensus."

Liam O'Neill: "Hurling belongs to all of us and I would like to get that to the centre of people's mind when they start to engage in this debate."

When asked about the inevitability that the black card will be brought into hurling, the President made it clear that no plan is in place for such an introduction.

"Nobody has stated to my knowledge that the process is about to happen. It is speculation and I supposed a pre-empted strike by people who don't wish for it to happen.

"No committee has come up with that suggestion yet and if the consensus is that people don't want that, that's fine, as long as there is a rule system that guarantees the skill of a player is allowed to be demonstrated and enjoy his game. That is what is most important to us.

"We have a process now, we have proven it with the Football Review Committee (FRC), we got 4,000 responses to a survey, we did a recent survey for our strategic plan and we got 13,900 responses.

"We have the means now of reaching people and listening to their views. The promise I will give to anybody that makes a suggestion is their view will be entertained, debated and will be taken on board. When a consensus emerges, we will see what happens." 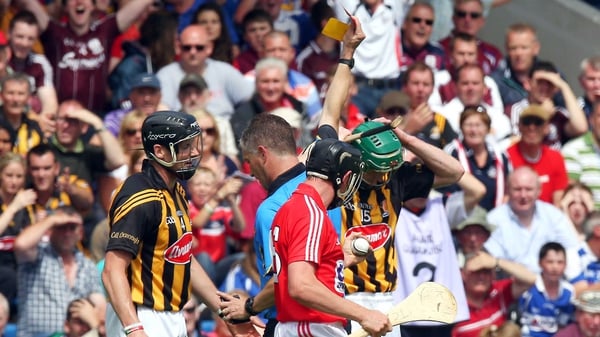