Clare are All-Ireland senior hurling champions for the first time since 1997 after defeating Cork by 5-16 to 3-16 in a classic at Croke Park.

In front of 82,276 spectators at HQ, the Banner County scored a six-point success in a titanic replay.

Shane O’Donnell, a late call-up to the starting line-up in place of Darach Honan, justified his inclusion with a stunning individual haul of 3-03, all from play.

O’Donnell hit all three goals in the opening 19 minutes of the first half and while Cork came from eight points down to draw level during the second half, the winners had a kick left in them as goals from Conor McGrath and sub Honan secured a fourth Liam McCarthy Cup success for Clare.

With 18 minutes left on the watch, the scores were level at 1-16 to 3-10 and they were deadlocked again with ten minutes left as Seamus Harnedy’s goal brought Cork on terms, 2-16 to 3-13.

But Clare’s response was magnificent as McGrath crashed home a magnificent 62nd minute goal into the top corner of the Davin Stand netting.

But in the second minute of stoppage time, Honan cut in from the left touchline and somehow managed to bundle the ball over the line for the eighth goal of a quite incredible spectacle. 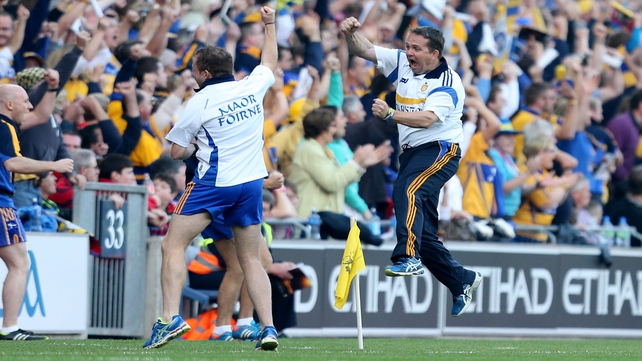 And with that, Clare manager Davy Fitzgerald, an All-Ireland senior medallist in 1995 and 1997, added yet another notable entry to his coaching CV, with his opposite number Jimmy Barry-Murphy left to reflect upon a rare big-day defeat.

At half-time, Clare led by 3-09 to 1-11 after an exhilirating opening 35 minutes, plus one added by referee James McGrath for stoppages.

O’Donnell was the undoubted story as the Éire Óg man struck for that magnificent hat-trick.

The full-forward banged home his first goal in the sixth minute, collecting a pass from the marauding Patrick Donnellan before finishing clinically past Anthony Nash.

That score opened up a 1-03 to 0-02 lead for the Banner men, who had started well with the opening two points of the game from John Conlon and O’Donnell. 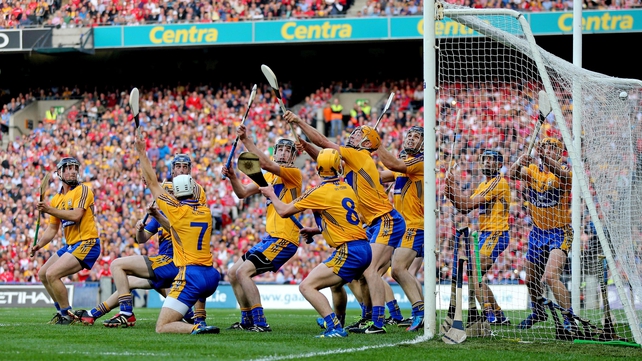 O’Donnell’s opening goal was the first of four in the first half – with the 19-year-old bagging all but one of them. He knocked in a second goal in the 13th minute, with Conor McGrath providing the defence-splitting pass on this occasion.

But Cork, despite going seven points down (0-04 to 2-05) were hanging in there and a Nash goal in the 16th minute provided the Leesiders with badly-needed oxygen.

Yet again, it was another magnificent strike from the man who has turned the art of taking penalties and 20m frees on its head.

Cian Dillon’s foul on Cork skipper Pa Cronin was punished emphatically by Nash, who hammered home a 20m free that was struck from 14m in truth, such is the perfection of Nash’s lift before the devastating connection.

But it wasn’t long before Nash was picking the ball out of his own net again.

O’Donnell’s treble was collected by the 19th minute as he took advantage of poor Cork defending to improvise brilliantly and bat the ball past Nash. 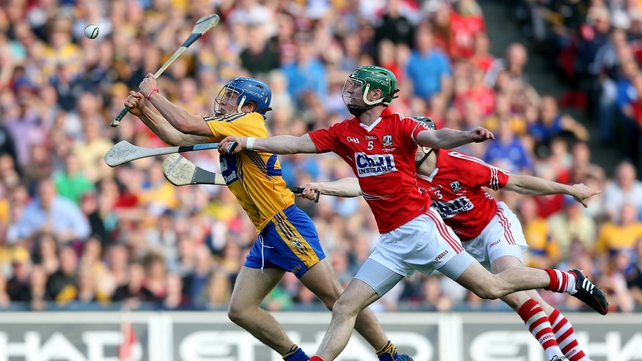 Cork full-back Shane O’Neill, enduring a torrid time at the hands of O’Donnell, was left bamboozled again as the red-hot forward bagged the first All-Ireland final hat-trick since Tipperary’s Lar Corbett in 2010.

Clare were 3-06 to 1-06 clear now and flying but Cork threatened again ten minutes before half-time, with Patrick Horgan (scorer of nine points) hit with a hefty Brendan Bugler challenge as he bore down on goal, before Clare goalkeeper Patrick Kelly shepherded the Cork hitman out over the end line.

Clare opened up their biggest lead of the half, eight points, when Colin Ryan’s fifth free of a flawless first half sent Clare 3-09 to 1-07 in front.

But Cork finished the half strongly with four unanswered points, one of them awarded to Cronin by HawkEye after his shot was waved wide initially.