A second half goal from Danny Sutcliffe was the decisive score for the Dubs, who never trailed over the course of the seventy minutes.

Some poor freetaking from Paul Ryan threatened to deny Anthony Daly’s men their famous victory but the defence held firm in the closing stages to deny Kilkenny the goalscoring chance that they badly craved.

Dublin picked up right where they left off last week, competing frantically for every ball, while Kilkenny’s difficulties in front of the posts last Sunday also carried over into tonight’s fixture.

The Cats scored just four points from play over the course of the 70 minutes, while Richie Power’s point with just over ten minutes to go was their solitary score from anything other than an Eoin Larkin placed ball in the second half.

Yet again Dublin defended brilliantly and this time around Kilkenny got nothing from Walter Walsh, who was shut out of the game by Paul Schutte.

In the absence of a big performance from their Tollogher-Rosbercon giant, only Richie Power really took the game to Dublin up front and his day was sullied by a late dismissal for a second bookable offence.

David O’Callaghan came into the Dublin team in their only change from last week’s starting 15 and the pacey full forward caused JJ Delaney huge problems right from the off, rattling two points in the first few minutes and four over the course of the opening half.

After 25 minutes the Dubs had built up an 0-9 to 0-5 lead and Brian Cody was forced to call upon his replacements, with Lester Ryan and Colin Fennelly coming into the fray.

Both men made a meaningful impact but Ryan’s introduction was a particularly significant factor in Kilkenny’s resurgence, as he won a lot of loose possession in the middle third of the field. 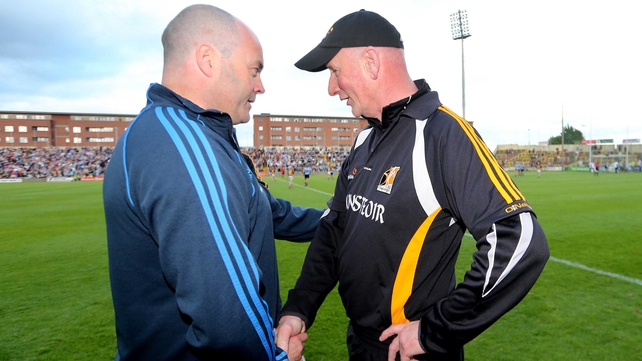 The four point lead remained at half time, 0-11 to 0-7, but Kilkenny set about their business early in the second half and some direct running at the Dublin half back line yielded results.

Eoin Larkin’s freetaking ensured that every Dublin indiscretion was punished, while at the other end Paul Ryan struggled to find his range, missing five frees in total.

With a quarter of the game to go Dublin’s lead was down to one, 0-13 to 0-12, before Sutcliffe scored his crucial goal. Good work from Mark Schutte in the right corner set up a goal chance for O’Callaghan, who turned his man on the edge of the square and beat Eoin Murphy with a shortened grip on the hurl, only to see Lester Ryan make a wonderful goal-line intervention.

The loose ball ran clear to Sutcliffe, who drove at goal with the Dublin supporters screaming at him to take his point. Their tune changed when the Trinity College student planted a perfect shot low into the bottom right corner.

Mark Schutte stretched Dublin’s lead stretched out to five, but the Cats roared back in the last ten minutes and got back to within two, 1-15 to 0-16.

However the Dublin full back line held firm and a late Eamon Dillon free consolidated what is probably the most significant result for Dublin hurling since their All Ireland final defeat to Tipperary over fifty years ago.