Reigning All-Ireland champions Loughgiel Shamrocks and St Thomas's will have to meet again as their All-Ireland club hurling semi-final finished level at 1-25 to 3-19 draw at Parnell Park.

The Antrim side looked set to relinquish their crown when they trailed by four points in the dying moments of extra-time but Liam Watson saved them.

He had a 20 metre free tipped over to leave a goal between them and then blasted home a free with the last puck of the game after St Thomas’ were penalised for lying on the ball in a crowded goalmouth.

It was a fitting end to an amazing contest. St Thomas’, winners of their first ever Galway crown before Christmas, came out of the blocks with three points in the opening two minutes but a scrambled goal from Shay Casey left the champions 1-7 to 0-8 ahead at the interval.

The Galway side again got on top after the restart and hit four points without reply to lead by 0-12 to 1-7 after 37 minutes.

St Thomas’ managed to open up a goal lead but Loughgiel Shamrocks hit back in a gripping contest and Benny McCarry fired home an excellent goal after 50 minutes to go one in front.

Loughgiel’s Enda McCloskey and Bernard Burke for St Thomas’ exchanged points and then Tony McCloskey and Conor Cooney did likewise to leave one between them seven minutes from the end. 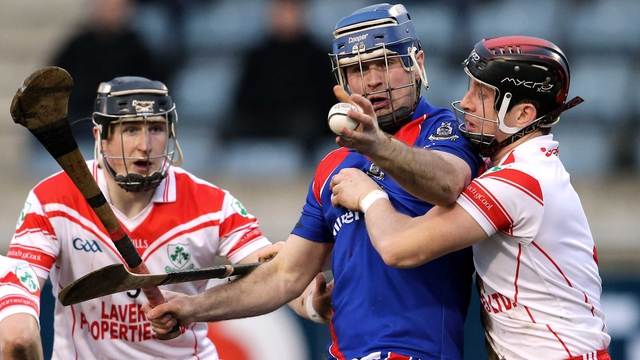 Both sides missed good opportunities in a hectic finish but Conor Cooney, the man of the match, displayed nerves of steel to steer over the equaliser from the right-wing in the first minute of stoppage time and force extra-time.

Cooney finished the game with 0-12, seven of them from play, two frees, two sidelines and a 65 and was the most dominant player in open play.

The drama did not end there and a goal from substitute Gerald Murray in the final minute of the first period of extra-time saw St Thomas’ lead by 1-21 to 2-15.

St Thomas’ looked set for victory when they pushed four points clear in the closing stages but Watson had a free tipped over, after Kenneth Burke picked up a second yellow card, before he struck for his dramatic equaliser when he blasted past eight players on the line.