Three first half goals laid the platform with Declan Coulter (2) and Conor Corvan both netting to help the Orchard men take a 3-13 to 0-08 interval lead. The sides shared six points equally in the third quarter, but Louth pushed Armagh hard late on.

Louth registered 1-02 without reply including a Brian Corcoran goal, but the Ulster side had done enough to be crowned champions.

In ideal conditions, Armagh showed their intent right from the off and powered into a 1-01 to 0-00 lead in just five minutes.

David Carvill opened the scoring with a pointed free in the third minute and he went on to register four further scores before the break.

Armagh continued to look impressive early on, with Coulter firing home his first goal in the fifth minute after collecting a pass from Paul McCormack.

Shane Fennell claimed the first of his nine points for Louth shortly afterwards, and then Carvill and Fennell traded scores to ensure a 1-02 to 0-02 scoreline.

However, Armagh lifted the tempo again when registering six of the next seven points to move 1-08 to 0-03 ahead in the 19th minute. Ryan Gaffney, David Carvill, McCormack, Coulter and Conor Corvan were all on target for the Orchard County.

Corcoran kept Louth in touch and while Fennell ended Armagh's scoring streak with a well-taken point, Armagh turned it on once more.

In the 20th minute, Coulter went from poacher to provider as he was involved in the move which set up Conor Corvan's goal. The Keady clubman smacked a shot into the top corner of the net from the tightest of angles to give Armagh a 2-08 to 0-04 buffer.

Coulter extended his side's advantage to 11 points and although Louth responded with points from Fennell and Donagh O'Sullivan, again Armagh took control.

Coulter completed the goal haul for the eventual winners and brought his personal tally to 2-02 with a 26th minute effort. The sides then traded points on two occasions before the interval, but Armagh landed the final three points of the half to take a 3-13 to 0-08 lead into the second period.

A first point from Ruairi McGrattan extended their advantage inside 40 seconds of the restart, with scores from Conor Corvan and David Carvill widening the margin to 17 points in the 44th minute.

Louth bounced back with a trio of points from Diarmuid Murphy, Fennell and Adrian Wallace. Substitute John Corvan claimed a rare score for Armagh, but the Wee County were not finished yet.

Louth were handed a lifeline in the 57th minute when full-forward Brian Corcoran cut through for their only goal. The Mattock Rangers clubman cut in from the wing on the Cusack Stand side to power a 30-metre shot past Armagh stopper Simon Doherty, making it 3-17 to 1-11.

Louth's comeback bid continued with Fennell slotting over two points, one of which came from a free and the other a neatly taken '65', to cut the deficit to 10 points with as many minutes remaining.

They had further chances to eat into the Armagh advantage but sent two efforts wide in quick succession. Louth stood firm defensively at the opposite end with Wesley Morrissey and Donagh O'Sullivan both prominent.

Armagh broke through for their first score in 11 minutes from substitute Fiachra Bradley. Louth kept up the pressure with scores from Fennell and Corcoran, but these were cancelled out by efforts from Paul McCormack and John Corvan.

Corcoran had a chance to eat further into the Armagh lead late on, yet his powerful shot from a free was expertly blocked by the Armagh defence and there was no stopping Michael Johnston's men.

Louth lost their fourth final at this level as their search for a first Nicky Rackard Cup title continues. After the game winning captain Ryan Gaffney collected the trophy on Armagh's behalf from GAA President Liam O'Neill. 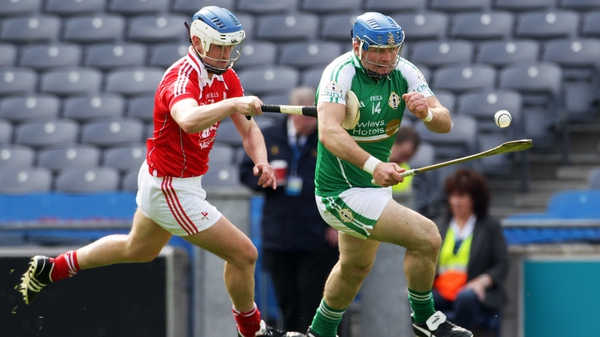