Henry Shefflin and Eoin Larkin scored three goals between them as Kilkenny claimed their fourth National League title in five seasons defeating Limerick 3-11 to 0-14 points at Semple Stadium this afternoon.

Limerick offered much and battled until the finish, as typified by wing forward Conor Fitzgerald who scored four points from play, but their 15-game unbeaten run this season is finally at an end.

In only his second game back after a groin injury, Shefflin helped himself to a decisive 2-06 (3f) and set Larkin up for a twelfth-minute goal. James Stephens star Larkin returned the favour as his elusive running paved the way for Shefflin's two green flags on 36 and 57 minutes.

In the sides' first NHL final clash for 23 years, there was little between them after a furious opening. Shefflin had two points – one free – to his name by the fourth-minute, but Barry Foley, playing in his first inter-county game for three years, was equally effective at the other end.

In an inspirational spell between the fifth and ninth minute, Patrickswell clubman Foley knocked over three points – two frees – to push Limerick 0-03 to 0-02 ahead. The 28-year-old was certainly in 'dead eye' form, but Kilkenny clinically cancelled out Foley's contribution when Larkin fired home a well-worked goal on 12 minutes.

Shefflin delayed his low-slung pass from the left flank sufficiently for Larkin to race on, collect possession to the right of the square and arc a stunning shot to the top left corner of the Limerick net.

But the Shannonsiders, in their first League final since 1997, were well primed for a battle as evidenced by Brian Begley's muscular point, five minutes later.

He claimed a high ball, fighting off the attentions of JJ Delaney to swing over from 35 yards out.

The sides then went point for point as Shefflin, Stephen Lucey, Fitzgerald and Aidan Fogarty all raised white flags. Wing forward Fitzgerald’s 20th-minute effort was the pick of the bunch – Brian Geary set Limerick on the attack with a block down on John Tennyson, Andrew O’Shaughnessy thundered forward and Fitzgerald did the rest from 40 yards out.

1-04 to 0-06 in front, Kilkenny stuttered slightly as James 'Cha' Fitzpatrick flashed two shots wide and Martin Comerford blasted high to the right and wide under fierce pressure from the Limerick defence, with captain TJ Ryan and Mark Foley – two members of the 1997 final side – in defiant mood.

Fitzgerald, gathering a Mark Foley clearance, managed to level on 33 minutes, but just seconds after Limerick wing back Denis Moloney had skewed a point attempt wide, Shefflin swooped for his first goal.

Larkin motored into Limerick territory and although his pass to his left was a low one, Shefflin showed stunning skill to flick the ball in the air and outfox advancing keeper Brian Murray by batting it overhead into the Limerick net.

Not to be outdone, Limerick forced James McGarry into a superb double save as the first half came to a close – O’Shaughnessy and then Barry Foley were denied by the Kilkenny number one as his side went in at the interval with a 2-04 to 0-07 advantage.

The sides split the first four points of the second half – Shefflin scored twice (one free) with Lucey, cracking over a great point from the right sideline, and Fitzgerald replying for Limerick.

Fogarty sent over his second point for 2-07 to 0-09, and after two misses from frees, Barry Foley was successful with a lengthy one as Limerick maintained their pace.

Foley added another free after Fitzgerald had fought bravely to win the ball, and with 16 minutes remaining, there were suddenly just two points between the sides at 2-07 to 0-11.

But just when they looked in trouble, the defending champions put in a telling spurt, scoring 1-02 in the space of four minutes to all but end Limerick's fight.

First, Murray was forced to flick a Fitzpatrick point shot over his bar, then Shefflin struck for his second goal. Larkin blazed through the centre of the Limerick defence with Moloney trailing in his wake and his timely hand pass was whacked beyond Murray's grasp by Ballyhale ace Shefflin.

It would have been hat trick time for Shefflin just moments later had substitute Willie O'Dwyer spotted the 2005 All-Star out to his left, unmarked and within range for a third goal. O'Dwyer, on for the injured Richie Power, made up for it by laying off for Fitzpatrick to knock over his second point.

Substitute Michael Fennelly and Shefflin added further points in the 69th-minute as Cody's side copper-fastened their grip on the county's 13th League crown.

In between, Foley (free), substitute Niall Moran and Fitzgerald, hitting the game's final point in injury-time, kept Joe McKenna's men in the hunt, but frustratingly there was no sign of a goal for Limerick, who face Waterford in a tasty Munster SHC quarter-final clash at the same venue in two weeks time. 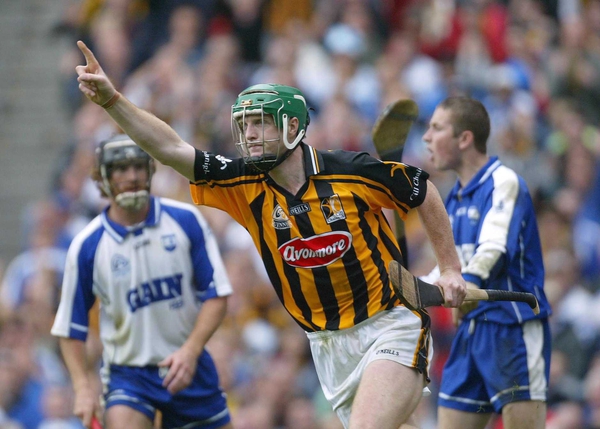 Cats advance to meeting with Limerick