Ireland have finished 11th at the Hockey World Cup following a final-day loss to China who struck twice in the last 10 minutes to take victory at the Wagener Stadium.

For periods, the Green Army made most of the running but China’s half-court defence and greater accuracy in the two circles made the difference.

Chen Yang’s corner goal in the seventh minute broke the deadlock and Zhong Jiaji and Chen Yanhua stretched the scoreline out before Michelle Carey’s sliding touch got one back in the dying embers.

The 11th-place finish comes with the small consolation of putting Ireland above their pre-tournament ranking and they will now look forward to August’s European qualifier tournament in Dublin.

The match itself was special for two Irish players with Ayeisha McFerran becoming the joint most capped Irish female goalkeeper - alongside Emma Gray on 118 caps - while Siofra O'Brien made her debut, coming in for the injured Caoimhe Perdue.

China were out of the blocks quicker, winning the first of eight penalty corners in the first half in the early stages. Ireland’s defence in this facet of the game was strong with Sarah Torrans - despite heavy bandaging on her knee - charging down a series of shots.

But they could not keep out a neat move in the seventh minute when Ma Ning turned smartly onto her backhand and fizzed the ball across for Chen Yang to deflect home.

The Green Army gave as good as they got in a stop-start first quarter. Hannah McLoughlin’s corner shot did find its way in via Naomi Carroll but illegally so with a free out given and Deirdre Duke’s shot cleared the crossbar in a good phase of attacking waves.

The second quarter was tighter still with chances at a premium outside of corner chances for either side, McFerran up to the challenge.

The scoreline remained the same through Q3 which was far more engaging. China hit the post from their ninth corner but it was brief respite for the Asian side as Ireland piled on the pressure for this 15-minute phase. 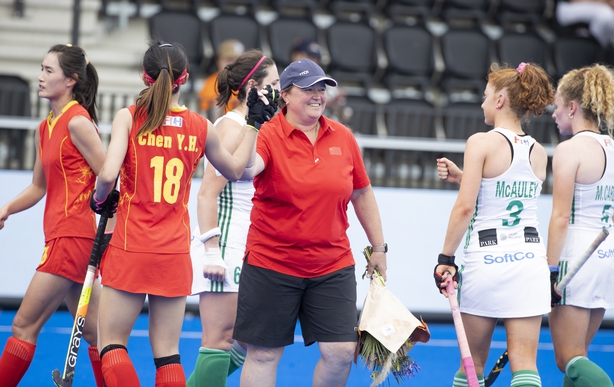 Michelle Cary and Duke led the line brilliantly, hassling at every turn to help effect a string of well-placed turnovers while Duke also made work Liu Ping work, as did Róisín Upton with a corner drag-flick.

But they were left with a mountain to climb - with Sarah McAuley in the sin-bin - when Zhong Jiaji’s penalty corner drag made it into the bottom of the backboard. The game was out of sight in the 52nd minute when Zhang Xindan slipped the ball into the path of Chen Yanhua who swept home first time.

Ireland kept fighting and did get one back with two minutes to go, a lovely Carey touch to an Upton push at corner time.