Ireland’s hope of reaching the World Cup knock-out stages are hanging by a thread after they fell to a 1-0 defeat to tournament debutantes Chile at the Wagener Stadium in Amstelveen.

Ireland now must win on Wednesday against Germany and hope the Netherlands beat Chile - and the goal difference works in their favour - to make it out of Pool A.

It was a day in which Ireland could not get the best out of their penalty corner attack as 10 setpieces went unconverted while the South American side whipped home the winner with 12 minutes to go via Denise Krimerman Losada.

The first three quarters were scoreless, with Ireland unable to make full use of six penalty corners while Chile also were indisciplined, spending a third of the quarter short-handed due to cards.

Sarah Torrans deflected a first-minute chance into the bottom corner but Katie Mullan’s cross from the left was deemed to have hit her back-stick.

Mullan then had a backhand shot test Claudia Schuler before the South American side endured their first sin-binnings with less than 10 minutes gone as the match threatened to boil over.

The first-quarter break allowed things settle and Chile did pick off a few strong counters with Domenica Ananias’ cross almost turned in by a diving Paula Valdivia.

Ireland's Hannah McLoughlin went closest to breaking the deadlock before the first half when she turned on her reverse-side and clipped a shot that nicked the outside of the left post.

With so much at stake, the third quarter became scrappier and increasingly tense with the play more and more fractious. Chile had two corners fall their way but Ayeisha McFerran and her defensive numbers closed the angles while Francisca Tala’s mid-circle shot on the turn was just wide.

But the game turned with 12 minutes to go when Chile picked off yet another setpiece and this time, Krimerman Losada slapped hard and true down the left channel to hit the backboard.

The Green Army responded immediately, winning three more corners to no avail while Zara Malseed had a trio of shots on goal, all defended by desperate defensive sticks.

Life got harder still when Lena Tice was shown a yellow card for a foul on halfway and Róisín Upton took a blow to the head.

Ultimately a hugely frustrating afternoon ended in defeat. Ireland are heading for the last-chance saloon.

"We love playing Germany, it's a really good challenge and we've had some good results in big tournaments against them" 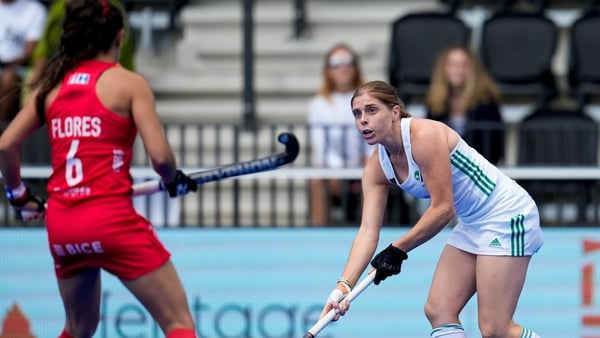