Ireland finished their EuroHockey Championship campaign with a flourish as Anna O’Flanagan’s double underpinned a strong 3-0 victory over Italy.

The record goalscorer struck in the second and third quarters to set up the win before Ards native Zara Malseed netted her first international goal in just her second full cap, giving an upbeat finish to a bruising tournament.

Megan Frazer and Naomi Carroll were both rested for this one, joining Chloe Watkins in the stands with Muckross’s Sarah McAuley coming into the side for her first formal cap.

And Róisín Upton departed in the third quarter with a head injury to leave Ireland working off a shortened rotation.

With Italy adopting a catenaccio system, the first quarter was a maze of patience as the Green Army attempted to unlock a packed defence. Other than O'Flanagan’s pot-shot, it passed by relatively serenely but the tempo ratcheted up a notch in the second quarter. 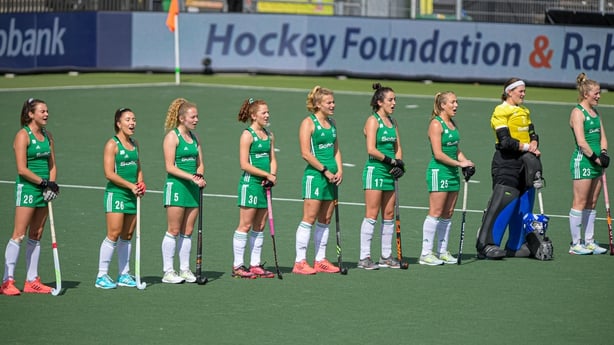 Ireland ran up a quartet of penalty corners while Malseed showed her key strengths, shooting on sight early from half-chances to test Sofia Monserrat’s padding.

And the goal arrived in the 27th minute when Upton drove forward from the back. Her cross popped up dangerously off a defensive stick but O’Flanagan did not stick around to wait for a whistle, clubbing the ball baseball style into the goal.

It enticed Italy out of their shell to some extent in the third quarter, winning their first penalty corner but Ayeisha McFerran was up to the task, knocking away her Kampong club mate Chiara Tiddi’s attempted drag-flick.

The extra breathing room came in the 42nd minute when Sarah Hawkshaw used her pace to out-strip her marker on the right baseline and she laid on the perfect pass for O’Flanagan to sweep in her second of the day.

Malseed extended the lead with an expert tip-in, guiding in her first international goal from Katie Mullan’s intercept and cross. They duly closed out the tie comfortably to finish sixth overall.

It left the Green Army with two wins, a draw and two defeats from the competition but it was ultimately a frustrating week, with the key targets of a maiden semi-final and a World Cup ticket proving elusive due to "goals scored" in the group stages.