Ireland's World Cup qualification bid looks set to come down to October’s final qualifier after they could not build on a strong start against England in the EuroHockey Championships’ Pool C.

Deirdre Duke’s outstanding early goal had them dreaming of a first win over England since 1983 – and a first in several Euro meetings – but three second-quarter goals put paid to those hopes as they ultimately fell 5-1.

As such, barring an unlikely turnaround in fortunes – requiring a heavy England loss to Scotland and a big Irish win over Italy – Ireland will now contest an eight-team qualifier in October for a ticket to next summer’s World Cup.

"We started really well, building really good possession and going for it," was the assessment of Lizzie Holden, playing in her 200th cap.

"The wheels came off in the second quarter and they gathered momentum. That was the difference and there are just such fine margins in these Europeans.

"It spiralled out of control but we still put in a really good shift and am proud of the girls' work-rate."

Coach Sean Dancer concurred, adding: "Really disappointing; there was a lot on the line today and that obviously adds a lot of pain to the whole thing.

"We started the game well first quarter and I was really happy with how the game was going. We just couldn’t keep it going.

"The key thing about that first quarter is we backed ourselves. We just didn’t do that second quarter, missed a couple of opportunities from our attacking penalty corners and let a few in."

The Irish survived a tricky opening as the world number fives penned the Green Army back but super first-up defence limited any damage and soon, they started to make inroads at the far end.

Deirdre Duke had given Ireland the lead, but England have fought back to move 3-1 ahead

The approach was more direct with Naomi Carroll and Katie Mullan finding space to drive on and the opening goal came in the 13th minute. It was a glorious piece of work, created 70 metres out from goal as Anna O'Flanagan chipped a Carroll pass beyond her marker to unlock space.

A quick interchange with Nicci Daly was followed by O’Flanagan’s perfect cross that Deirdre Duke dove onto.

But the game turned England’s way with three goals in a nine minute spell in the second quarter. Anna Toman picked a brilliant line to clatter the backboard from England’s second penalty corner. 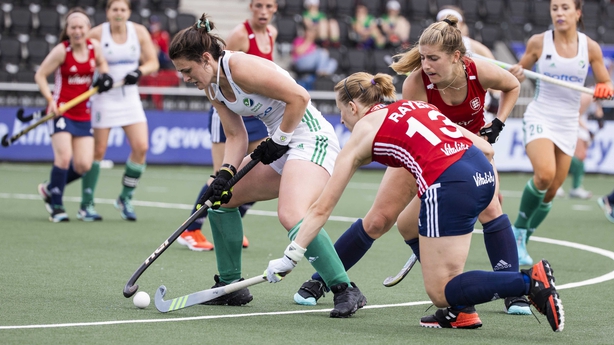 Danger-woman Lily Owsley’s baseline run finished with an inviting pass to the back post that Sarah Evans gobbled up to swap the lead. And Evans was on hand to volley in the third just before half-time from Ellie Rayer’s pass, leaving Ireland with a mountain to climb.

And that became steeper in the 42nd minute when Giselle Ansley’s corner shot took a heavy defensive touch to lift out of reach of Ayeisha McFerran and into the goal.

Toman then completed the result with 70 seconds remaining with another strong corner sweep shot.

"The reality is it is still a must win game and we have to approach it that way," Dancer added.

'There was a lot on the line' - Head coach Sean Dancer on disappointment of defeat to England for @IreWomenHockey at #EHC2021 #RTESport pic.twitter.com/GI5vO1BcMQ