Leona Maguire produced a flourish of four birdies and an eagle in the last seven holes of round three at the KPMG Irish Women's Open at Dromoland Castle to move right into contention and within two shots of the lead entering the final 18 holes on Sunday.

Teeing off in mid-morning, Maguire progressed to nine under par with the lowest round of the day, a 65, but even she must have been surprised to be so close to the lead at the end of the day as most of the players ahead of her at the start of play either made far more modest inroads on par or fell away out of contention.

The 54-hole leader is now Anne Van Dam of The Netherlands, the longest hitter on either the LPGA Tour or the LET, who shot a round of 70 to get to 11 under, one stroke clear of six players which includes Moa Folkeh, the 27-year-old Swede who shot the low round of the week on Friday - a 62 - but was 12 shots worse off yesterday with a 74.

Leona Maguire reflects on a fantastic 65 that brings her back into contention at the KPMG Women's Irish Open. The Cavan woman joins us on commentary for the remainder of the Day 3 action
📺 Watch live: https://t.co/u0SF6ZWVkn
⛳ Leaderboard: https://t.co/eGEiEla2v1#WIO2022 pic.twitter.com/XpwBuA535v

Then in the group two shots off the pace is Maguire whose third round ignited when she chipped in from 30 feet for birdie on the uphill par-four 12th. From there on, the burden of Friday’s poor round of 75 seemed to lift and she made tap-in birdies on the 14th and 15th holes followed by putts of 10 feet and 18 feet on the 16th and 18th greens – one for eagle and the other for birdie.

With the last five holes covered in five under, her move from tied 42nd at the start of the day into the top ten was only part of the story as to why she’s now in contention as a cool afternoon breeze helped keep the birdie count down for the rest of the field.

That may have been a stroke of good fortune but her 65 was one of only seven rounds all day in the 60s - out of 63 players in the field and to a great degree, she made some of her own luck.

Maguire felt the crowd helped her on her quest to get back in contention.

"The crowds were phenomenal, especially on the back nine, and I suppose I wanted to give them something to cheer about," she told RTÉ Sport afterwards.

"I didn't get off the best of starts again today but a nice par save on 8 and a birdie on 9 gave me some good momentum heading into the back nine.

"I think that chip in on 12 was the first bit of luck I had gotten all week.

"It kind of changed everything and I had some nice birdies then coming in. That eagle on 16 was obviously a bonus.

"I'll try and play as well as I possibly can tomorrow and whatever happens, it has been a fantastic week." 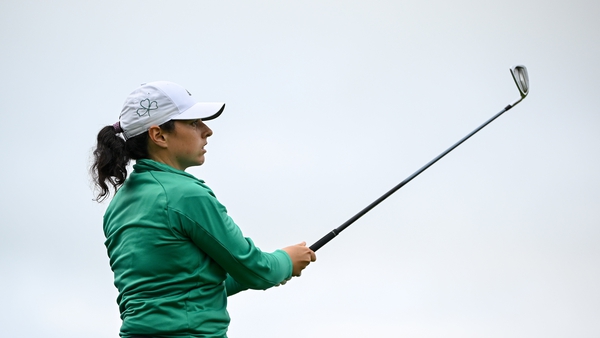