Graeme McDowell wants to see players given a vote on whether to allow LIV rebels to compete on the DP World Tour.

McDowell is one of 18 players from the Saudi-funded breakaway competing in the BMW PGA Championship, a situation which Rory McIlroy said he found "hard to stomach".

Defending champion Billy Horschel also labelled the likes of Abraham Ancer and Talor Gooch "hypocrites" for making their tournament debuts at Wentworth having previously shown no interest in the event.

The likes of McDowell, Ian Poulter, Sergio Garcia and Lee Westwood are eligible after their suspensions for playing in the inaugural LIV Golf event were temporarily stayed on appeal, with the full hearing set for February.

"I don't care about anything a courtroom suggests, this to me is about DP World Tour members and whether they feel like me and the other big names that are playing LIV Golf can bring any value to this Tour moving forward," McDowell said.

"If they think that's something they don't want, great; let's get to that decision and move on because the lack of clarity is just not good for anybody.

"I wish I'd have asked the question at the (players) meeting the other night. What is the process? Is there a way to expedite it? Does it have to happen in a court of law?

"Let's send 326 emails out (the Tour has 326 members) and maybe two videos; one from the LIV players saying we'd love to support this tour eight, 10, 12 times a year and then the other side of it is Keith Pelley's statement this week."

Chief executive Pelley delivered an impassioned defence of the DP World Tour on Wednesday in the face of what he termed the "LIV propaganda machine".

Pelley urged the players not to show disrespect by "parroting LIV's talking points" and dismissed Garcia's claim that the circuit is a feeder tour set to become the fifth best in the world.

His request that players did not wear LIV-branded clothing was not heeded by Poulter however, who was greeted with a mixture of boos and cheers on the first tee.

Poulter, who received a similar reception in the first round of the Open Championship at St Andrews, said: "I have only got Majesticks (clothing) with me. It's the logo that's on my left sleeve, it's part of a business I own."

Asked about a viral video of himself and Horschel having what appeared a lively discussion on the putting green at Wentworth, Poulter added: "I have no problem with Billy.

"Billy is quite an animated guy and I am too. Difference of opinions, he has strong opinions and I normally do too so you can tell how that would look on camera.

"All these people out here, I have been friendly with for a really long time. So let's draw a line (between) personal and business."

"I don't typically play for charity much but if it meant I could come and play golf in Europe and give my prize money to charity every week and that made everyone happy, then let's go."

McDowell insisted he would not change his decision to join LIV Golf despite the fact it has been so divisive and even said he "did not hate" the idea of foregoing prize money to be allowed to play on the DP World Tour.

"I mean what am I here for this week? I'm here for competitive golf and the world rankings," he added.

"I don't typically play for charity much but if it meant I could come and play golf in Europe and give my prize money to charity every week and that made everyone happy, then let's go.

"It's a bigger-picture conversation. I just wish there was an easy solution. I hate it's divided people, pulled friendships apart, hurt a Tour I care deeply about which is this one.

"The PGA Tour can suck up a loss like me very easily, I'm a blip on their radar, but I feel like I'm a part of whatever this is and put a lot of heart and soul into the last 20 years so it does hurt me that I'm hurting these players the way we are." 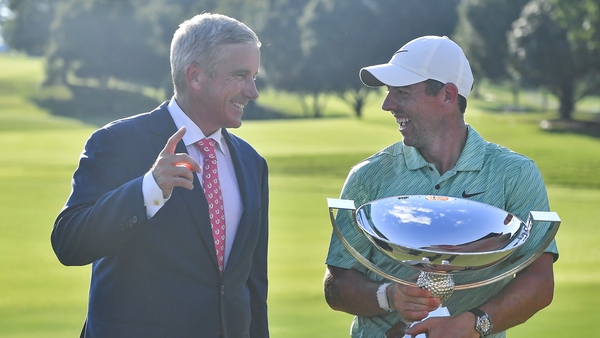 'Hard for me to stomach' LIV players at BMW Championship - McIlroy