R&A chief executive Martin Slumbers insists banning LIV Golf rebels from next year's Open is "not on the agenda", but has not ruled out changing the championship's entry criteria.

The PGA Tour has suspended members who have competed in the Saudi-backed breakaway without permission, while the DP World Tour fined players £100,000 and banned them from last week's Genesis Scottish Open, but saw that temporarily stayed on appeal.

The R&A announced last month LIV players who were exempt for the Open would be allowed to compete at St Andrews, following the stance taken by the USGA in relation to the US Open.

But USGA chief executive Mike Whan did admit he could foresee it becoming harder for LIV players to qualify in the future, a view echoed by Slumbers in his pre-tournament press conference.

"Looking ahead to the Open next year, we have been asked quite frequently about banning players. Let me be very clear, that's not on our agenda," Slumbers said.

"But what is on our agenda is that we will review our exemptions and qualification criteria for the Open. Whilst we do that every year, we absolutely reserve the right to make changes as our Open Championships committee deems appropriate.

"Players have to earn their place in the Open and that is fundamental to its ethos and unique appeal.

"I never said the best golfers would not be able to play. We will hold totally true to being open to anybody, but we will look at whether it is an exemption or through qualification."

The biggest exemption category for the Open is for the top 50 ranked players in mid-May, making LIV Golf's application to be allowed to award ranking points potentially vital.

Officials confirmed on Tuesday the application had been received on 6 July and "examination of the application will now commence", with the process expected to take several months.

However, the Official World Golf Ranking (OWGR) board comprises representatives from Augusta National, the DP World Tour, the PGA Tour, the R&A, the PGA of America, the USGA, and the International Federation of PGA Tours, leaving it open to accusations of a conflict of interest.

Slumbers declined to go into detail on that issue, saying: "The question of conflict of interest will be a matter decided by the UK Companies Act."

But Slumbers made it perfectly clear which side the R&A is on in golf's increasingly bitter civil war, with LIV Golf CEO Greg Norman having already not been invited to Tuesday's Champions' Dinner. 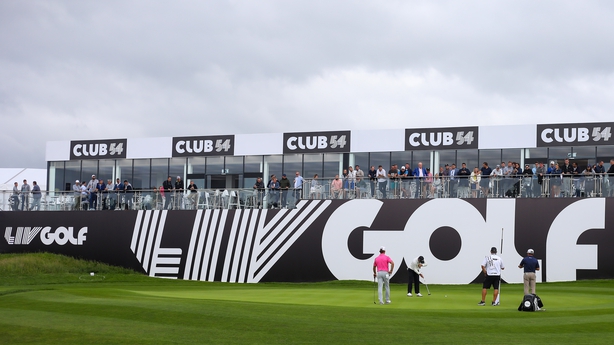 "Professional golfers are entitled to choose where they want to play and accept the prize money that is offered to them," Slumbers added.

"I have absolutely no issue with that at all. But there is no such thing as a free lunch.

"I believe the model we have seen is not in the best interest of the sport as a whole and is entirely driven by money, which we believe undermines the merit-based culture and the pursuit of open competition which makes golf so special.

"In my opinion the continued commentary that this is about growing the game is just not credible and, if anything, is damaging the perception of our sport which we are working so hard to improve.

"We believe the game needs to focus on increasing participation, achieving greater diversity and making sure golf is truly open to all rather than this narrow debate involving a small number of players."

Asked to explain why Norman had not been invited, when LIV players and former Open champions Phil Mickelson and Louis Oosthuizen are in the field, Slumbers added: "This is a very important week for golf.

"We are absolutely determined to ensure that this goes down in history as (being) about The 150th Open. We decided that, based on noise that I was receiving from multiple sources, that was going to be potentially unlikely (if Norman attended). We decided that we didn't want the distraction.

"Greg hasn't been here since 2010. He didn't come in 2015. In fact, it's many years since he's even been to the Open. So there would have been another reason for that. So it was very clear to protect the integrity of this week."

As for the prospect of presenting one of the 24 LIV players in the field with the Claret Jug on Sunday, Slumbers added: "Whoever wins on Sunday is going to have their name carved in history and I'll welcome them on to the 18th green.

"This is a golf tournament. The Open is about having the best players in the world playing, and I want to see who shoots the lowest score come Sunday night."

Follow our live blog for each of the four rounds of the 150th Open Championship on the RTÉ News app and on rte.ie/sport, with regular updates across Radio 1 and 2fm.