Matt Fitzpatrick celebrated a dream come true after holding his nerve to win his first major title in the 122nd US Open.

Fitzpatrick carded a closing 68 at Brookline to finish six under par, a shot ahead of playing partner Will Zalatoris and world number one Scottie Scheffler.

"The feeling's out of this world," the 27-year-old from Sheffield said. "It is so cliche, but it's stuff you dream of as a kid. To achieve it, I can retire a happy man tomorrow.

"It's what you grow up dreaming of winning and I've worked so hard for such a long time.

"I had the big monkey on my back of not winning over here, it's all everybody talked about and to do it in a major, there's nothing better.

"I don't know if Jack (Nicklaus) is listening to this but he gave me some abuse at the start of the year, when I won a member-member competition at his club and he said congratulations on finally winning in the United States.

"I can go back to him now and say I've won twice."

Fitzpatrick can also tell Nicklaus that he and the 18-time major winner now share the distinction of being the only players to have won the US Amateur and US Open on the same course.

Nicklaus achieved the feat at Pebble Beach in 1961 and 1972, while Fitzpatrick won the US Amateur at Brookline in 2013.

"Any time you're sharing a record with Jack Nicklaus, it's unbelievable," Fitzpatrick added. "So for me to have that as well is incredible.

"He called me up at the presentation to congratulate me. Coming from someone like that, it means the world."

Scheffler and Zalatoris both narrowly missed birdie putts on the 18th to force extra holes, with all three previous US Opens at Brookline having been decided in play-offs.

"I battled like crazy," Zalatoris said. "Obviously, you say that about every US Open round you play, but considering where I drove it today, the fact I was even under par was obviously pretty nice.

"I thought I made a lot of nice putts just to keep myself in it. Stealing one on 9, saving par on 13. I really felt great with the putter all week, and I hit a great putt on 18. It just happened to hang out there.

"It was fun, man. Matt's shot on 18 (from the fairway bunker) is going to be shown probably for the rest of US Open history.

"I walked by it, and I thought that going for it was going to be ballsy, but the fact that he pulled it off and even had a birdie look was just incredible. So hat's off to him."

For the Irish contingent, it was another strong showing, even after Shane Lowry narrowly missed the cut at a first major since the 2019 Masters.

Rory McIlroy appeared to be in the zone after an opening birdie but had to settle for tied-5th after a creditable but topsy-turvy 69, finishing on two-under.

However, McIlroy leaves Boston bullish about his prospects of ending his major drought.

"I'm good enough to win another major championship, it's just a matter of keeping myself in position and keep doing the right things," he told RTÉ Sport afterwards.

Seamus Power delivered another excellent major performance following his top-10 finish in the PGA Championship in Southern Hills. The Waterford man even nosed into contention following an opening birdie, though bogeys on 3, 9 and 10 sent him back to three-over.

A pair of birdies on 12 and 13 saw him return to one over par for the championship, ensuring a third successive 70 and a tie for 12th spot.

"Very enjoyable week. I loved the course right from the get-go," Power told RTÉ Sport afterwards. "Good test, it was a nice fair test and I was happy to be somewhere close to contention on Sunday." 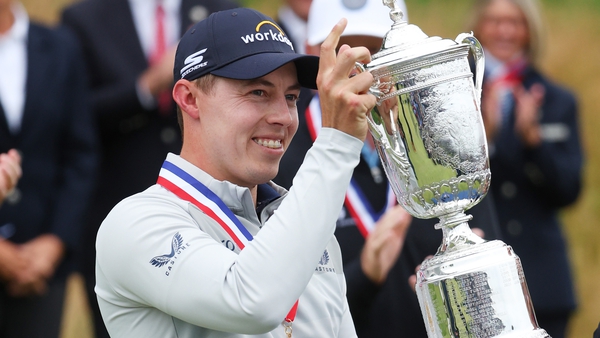