Rory McIlroy is just one off the lead at the US Open after carding a gutsy one-under 69 that left him on four-under-par overall at Brookline, Massachusetts.

Shane Lowry second round of 72 on the bounce saw him miss the cut (three-over-par), while fellow Irishman Séamus Power carded a 71 to sit on one-over and tied for 31st in a very condensed field.

McIlroy had been in danger of falling out of contention when he covered the front nine in 36, the world number three needing three attempts to hack on to the green from thick rough on the third, before holing from 23 feet to salvage a double bogey.

But after dropping a shot on the 10th, McIlroy picked up birdies on the 12th, 14th and 17th to remain firmly in the hunt for his fifth major title and first since the 2014 US PGA.

The Hollywood golfer is just one behind both Collin Morikawa and Joel Dahmen who both closed their second rounds at five-under.

"I think I have to go out with the mindset this week that I'm going to try to win my first again," McIlroy said afterwards.

"I'm playing as good a golf as I've played in a long time. I have a lot of experience. I'm in a good place. I'm really happy with where my game is at, and I think that's the most important thing." 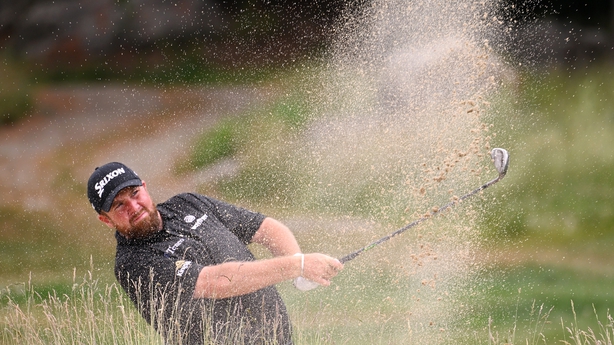 Lowry's tournament is over after a difficult back nine resulted in the Offaly native carding another two-over 72.

Lowry had a rocky time, his putting deserting him, especially around the turn. Bogeys on 12, 15, 16 and then the second left him at five-over.

Crucial birdies at the short par-four fifth and the par-five eighth hole - albeit with a bogey tossed in at the treacherous par-three sixth - saw him sign off on four-over.

Power is heading for the weekend however. The 35-year-old showed remarkable nerve all day. Despite bogeying 16 and 18, he got one back on 17 for an even par outward nine of 35.

Power has now made the cut three times out of three at majors this year and with such few strokes between competitors, he still has an outside chance of pulling off an upset this weekend.

Open champion Morikawa missed a birdie putt at the last which missed from just three feet for eagle on the par-five eighth, but tapped in for birdie and parred the last to complete a superb 66.

Playing partner Jon Rahm had also birdied the eighth to finish a shot behind alongside McIlroy, who birdied the 17th on his way to a battling 69.

Masters champion Scottie Scheffler was part of the group another stroke back, with England's Matt Fitzpatrick three off the pace on two under.