Rory McIlroy concedes his record in the US Open is "weird", but heads to Brookline confident of challenging for a second victory and overdue fifth major title.

McIlroy romped to an eight-shot victory at Congressional in 2011, claiming his first major title with a dominant display rendered even more remarkable by the fact that it came just two months after his painful collapse in the Masters.

The then 22-year-old became the youngest US Open champion since Bobby Jones in 1923 and the youngest major winner since Tiger Woods triumphed at Augusta National in 1997, breaking a host of scoring records on the way.

Yet although further major titles followed in the US PGA Championship (2012, 2014) and Open Championship (2014), McIlroy never contended in the US Open before missing the cut for three years running from 2016, his chances effectively ended by first rounds of 77, 78 and 80.

Since then, however, McIlroy has finished ninth, eighth and seventh and is no mood to settle for keeping that sequence going in strict mathematical order.

"It would keep my top-10 run going in the majors but that's not really of any consequence," McIlroy said with a smile.

"The US Open has been a weird one. I went through a few years of not playing well at it but honestly, it's been the major the last few years that I've felt the most comfortable at.

"I don't know if it's just my style of game has evolved, being a bit more conservative off the tee. Maybe it's something to do with the fact that Mike Davis (former USGA chief executive) doesn't set the golf courses up, either.

"Not anything against Mike, I just seem to enjoy US Opens a little more than I used to. But sixth place, look, I'm playing well and I know if I go and play my game at Brookline I'll hopefully be in the mix come Sunday.

"I'd take sixth after three rounds and see where that gets me, I guess. But I'm looking forward to it."

McIlroy has not won a major since the second of his US PGA victories at Valhalla in 2014 and admits he let a great chance slip through his fingers at Southern Hills last month.

The former world number one held a one-shot lead after an opening five-under-par 65, with Justin Thomas eventually defeating Will Zalatoris in a play-off after they finished tied on that score.

McIlroy shares lead ahead of Canadian Open final round

McIlroy was also four under after the first five holes of the final round, but bogeyed the sixth and then made 10 straight pars before dropping another shot on the 17th, a driveable par four.

"After nine holes I thought I needed to shoot another 31 to win, which would have got me to seven under for the tournament and I would have ended up winning by two," McIlroy said.

"If I had known five under (made a play-off), especially after the start, I don't know if I would have done anything differently, but I maybe mightn't have put as much pressure on myself to try to make birdies and make putts.

"I feel like Southern Hills was a missed opportunity but I have to take the positives from it. I did some really good stuff that week. It's just a matter of trying to build on that." 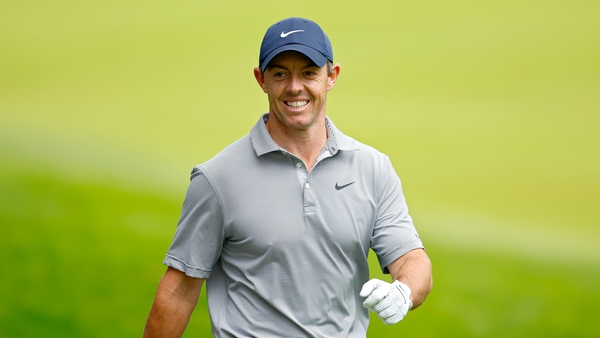 McIlroy in share of lead ahead of final round