Leona Maguire earned a top 10 finish at the US Women's Open despite a final-round 74.

The Cavan golfer was in a three-way tie for eighth on two under alongside world number two Nelly Korda and Megan Khang, 11 shots behind eventual winner Minjee Lee of Australia, who secured the biggest prize in women's golf

Maguire was five under heading into Sunday's conclusion at Pine Needles but three bogeys on the front nine saw her slip back.

Another bogey on 11 saw the two-time Olympian drop back to one under but she finished on a more positive note with a birdie on the 15th.

At the top of the leaderboard, Minjee Lee claimed an emphatic four-stroke victory.

The 26-year-old from Perth made a impressive start to the final round with birdies at the first two holes and was never headed en route to an even-par 71 in demanding conditions that made it tough for her pursuers to make a charge.

Lee finished on 13 under-par, collecting $1.8 million from a record total purse of $10 million, while American Mina Harigae (72) claimed second place on nine under.

Lee, who won her first major title at last year's Evian Championship, joins Karrie Webb (2000 and 2001) and Jan Stephenson (1983) as Australians to win the US Women's Open. 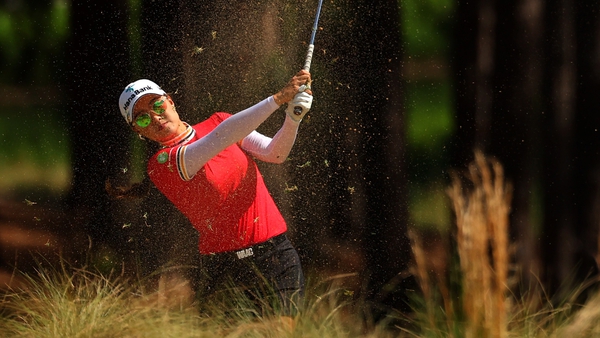 Minjee Lee makes her move at US Women's Open