Justin Thomas claimed his second US PGA Championship in dramatic circumstances in Southern Hills after making up seven shots on the leaders before besting Will Zalatoris in a three-hole play-off.

For the second straight major, Ireland had two golfers in the top 10, with Rory McIlroy in eighth on two under and Seamus Power a shot back in a tie for ninth in Tulsa, Oklahoma.

However this tournament may be remembered for the collapse of Chile's Mito Pereira at the 72nd hole. Knowing a par would be enough to claim his first win on the PGA Tour, he drove his tee shot into a creek and ended up dropping to a tie for third with a double bogey.

That left Thomas, who holed four birdies in the last 10 to card a third 67 of the week, and Zalatoris in a three-hole aggregate play-off after finishing on five under after 72 holes.

They both birdied the par-five 13th before Thomas struck a beautiful tee shot on to the green at the par-four 17th and made birdie to take a one-shot advantage to the 18th.

Zalatoris, who has competed at every major in a short career that is still waiting for a win on tour, could not make birdie, leaving Thomas with two putts to win and claim his second Wannamaker Trophy, after 2017.

Power secured a top 10 finish in only his second ever major, but the Waterford man, who has been so consistent all week, will be disappointed with his 72 - his poorest round of the week.

Teeing off alongside Abraham Ancer in the third last group on three under, disaster struck at the second hole as he carded a double bogey after finding the water with his tee shot.

He bounced back with a birdie at four and despite really consistent golf from there on out he was not holing the putts that were dropping on Saturday.

From the fifth hole onwards he carded 13 pars and a single bogey, at 10, as anything inside 10 feet seemed destined for the hole, but any longer birdie looks were just not falling for the 35-year-old.

Shane Lowry carded a final round 69 for a two-over finish and a share of 23rd.

After finishing runner-up in the Masters thanks to a closing 64 at Augusta National, McIlroy's second successive Sunday charge in a major ended in disappointment as the US PGA Championship headed for a tense climax at Southern Hills.

In stark contrast, McIlroy’s closing 68 in Tulsa was followed by him declining to speak to waiting reporters before quickly collecting his belongings from the locker room and heading to his car.

The reaction was understandable given that McIlroy had enjoyed a one-shot lead following an opening 65 from what proved the favourable side of the draw.

A second round of 71 was far from disastrous, but Saturday’s 74 left him nine shots off the pace heading into the final round, a deficit he swiftly reduced thanks to four birdies in a row from the second.

The par threes have been McIlroy’s undoing however – the 33-year-old playing them in five over par in round three even with a birdie on the 14th – and the sixth cost him another shot on Sunday after missing the green and hitting a poor chip to 20 feet.

Good birdie chances went begging on the ninth, 12th and 13th and McIlroy’s faint hopes were ended with a bogey on the short par-four 17th. 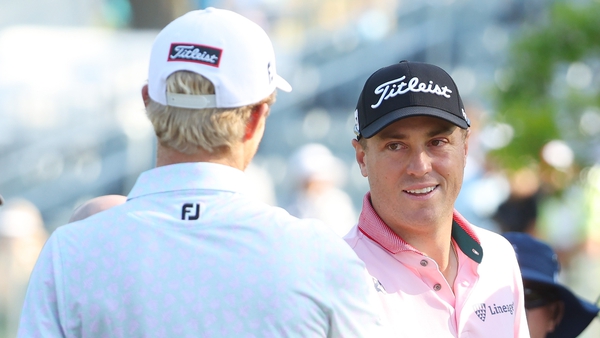