Minjee Lee of Australia shot a three-under 69 in Saturday's rainy third round to maintain a one-shot lead at the Cognizant Founders Cup in Clifton, New Jersey.

Lee, who sits at 17-under par, owned a three-shot lead after 36 holes at Upper Montclair Country Club.

Lee is being pursued by Sweden's Madelene Sagstrom, who shot a five-under 67 - the low round of the day - to sit one shot back at 16 under.

Lexi Thompson (69) sits solo in third at 14 under while Angel Yin (68) enters Sunday's final round six shots back in fourth place.

Rain along with windy conditions hampered the leaders over the final 11 holes.

With Leona Maguire having missed the cut for the weekend, Stephanie Meadow is the sole Irish player involved for the final rounds and she was 17 shots adrift of the lead after a third-round 73.

Meadow's round included two birdies, a bogey and a double bogey on the par-4 13th to leave the Antrim golfer in a tie for 69th.

At the top of the leaderboard, Lee opened with a birdie on the second hole but followed it with a bogey on the par-4 third. Lee paired another birdie on the front (No. 5) with another coming in at No. 13 to go with a bogey and eagle on Nos. 11 and 12.

"I knew it was sort of in my control a little bit today so I just tried to make as many birdies as I could. I hit a few loose shots here and there so (a) couple bogeys but still a couple birdies too and an eagle," Lee said.

"So it was nice to finish off under par."

Sagstrom posted a clean round, opening with three birdies on her first four holes. She added two more coming in to keep the heat on Lee. She has only recorded one bogey in her last 54 holes and is currently second in the field for most birdies through three rounds with 18.

"It's just one of those rounds that I been looking for in a while. It felt easy," Sagstrom said. "I left like I wasn't trying, but also wasn't giving myself too much grief when I was missing a putt or lipping it out. I had a lot of good chances and my putter was hot in the beginning but then kind of cooled down, but I wasn't getting upset." 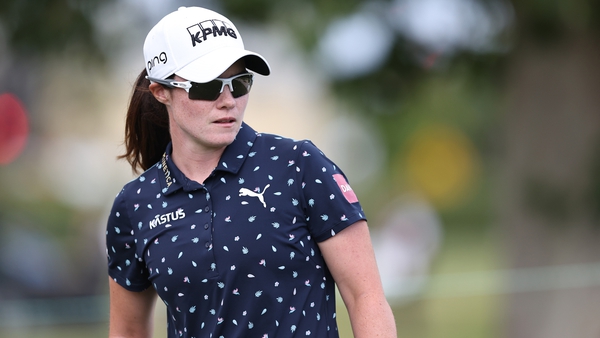 Out of sorts Maguire misses cut at Founders Cup