First-round leader Rory McIlroy will begin his third round at the Arnold Palmer Classic Invitational two shots off leader Viktor Hovland in a three-way tie for second place.

McIlroy, who has one victory and four top-10 finishes in his seven previous appearances at this prestigious event, began his week with a seven-under round of 65, but had to settle for a level par round of 72 to sit alongside Tyrrell Hatton and Talon Gooch on seven-under par overall.

A three-putt at the first saw the four-time major winner begin with a bogey, but starting at the par-5 fourth hole, McIlroy picked up three birdies in five holes to move to a share of the lead on nine-under par.

The back nine however wasn't as kind to the 32-year-old who failed to collect a birdie and dropped shots at 15 and 17 to slip back behind Hovland.

"Those are the sort of greens you expect to see late on a Sunday, not late on a Friday," McIlroy, the 2018 champion, said.

"It's going to be interesting tos ee where they go from here, but it's going to be a good test over the weekend. I'm glad I got 18 holes in those conditions because the course definitely changed a lot from when I played it yesterday morning to this afternoon."

Right at the flagstick. ⛳️

The Norwegian's round of 66 included seven birdies and a bogey at the 13th.

Billy Horschel (71 on Friday) is alone in fifth place at 6 under, and no one else is closer than six strokes behind Hovland, who needed just 23 putts to complete the low round of the day at Bay Hill Club & Lodge.

"I knew I putted well, but I didn't know it was 23," Hovland said. "I just really saw the lines really well and able to start it online. Sometimes when you see a couple go in early, it's easy to keep that feel going throughout the day."
Hovland began on the back nine and birdied Nos. 10 and 12 early. After recording his lone bogey at the par-4 13th, he strung together three birdies at Nos. 15-17, the first of which fell from 26 feet away. He wrapped up with birdies at the par-5 fourth and sixth holes.

A double-bogey at 11 contributed to Graeme McDowell’s 76 and he sits at level par, while Padraig Harrington was just inside the cut line at +3 following a round of 74 that included a 58-foot birdie at the first and double-bogey at the sixth.

Birdie for breakfast. ☕️@Padraig_H drains it from 58 feet to start the day. pic.twitter.com/jMc99hkzEs

Seamus Power will play no further part in the tournament. A round of 72 was never going to be enough for the Waterford man who opened with an 80 as he finished on +8 overall. 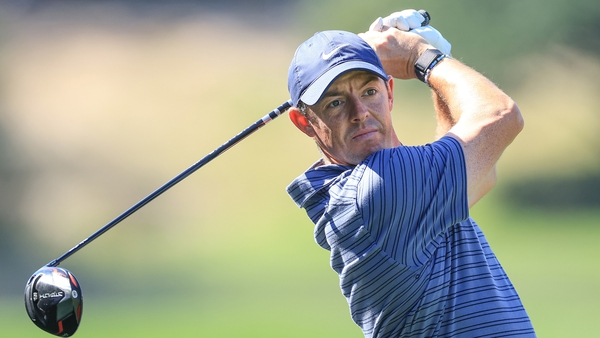