Leona Maguire is the first Irish winner on the LPGA Tour after a stunning final round performance at the Drive On Championship in Florida.

In blustery conditions, Maguire conjured up a superb display of driving off the tee, while her iron play was impeccable, rarely leaving herself anything other than pin high putts.

A birdie at the second was immediately handed back at the next hole, but the Cavan golfer did not take a backward step from there - shooting birdies at the seventh and eighth to make the turn in two-under 34.

After the turn the 27-year-old caught fire, shooting birdies at three consecutive par fours - the 10th, 11th and 13th, the last coming following a brilliant drive to the edge of the green.

She left a birdie behind her on the par-three 14th, which made for a nervy last few holes, after Thompson holed out on the 10th for an eagle two, sandwiched between five more birdies as the leading two tore up Crown Colony Golf and Country Club in Fort Myers.

"It's a bit surreal...it’s 17 years in the making. I’m just proud of how the whole week went, especially today," she said afterwards.

"I have a lot of people to thank and it’s been a long road, but it’s probably more relief than anything else."

After five top-10 finishes last year, Maguire channelled all those experiences to close out victory.

"It was just to stay really patient. I felt like I did a really good job of that this week. I knew my game was close, I did a lot of hard work in the off-season and finally got there in the end."

Maguire went into the final round tied for the lead with Marina Alex on -13 after a second round 65, but her playing partner could not live with the Irish Olympian on Saturday, finishing five shots back.

Maguire played another exquisite approach at 15, leaving herself six feet for birdie, however she again failed to take advantage.

One hole ahead Thompson was hooking a drive into some shrubs on the right and grimacing as if she hurt her back. The American could not save par, leaving Maguire with a four-shot lead on the 16th tee.

The putt that sealed the deal. 🏆 @leona_maguire becomes a @ROLEX First-Time Winner at the LPGA #DriveOn Championship! pic.twitter.com/BfMcmYP5XX

The tournament was all but secured on the 16th green as she drained a 15-footer for birdie after another solid drive and pin-high approach shot to leave herself five shots ahead with two holes to play.

After par on the par-three 17th, Maguire had a five-shot cushion heading down the 489-yard par five 18th. A fine drive but her third came up short of the green and right, leaving an awkward fourth.

Perhaps some nerves or emotion displayed as she missed a short putt, but she holed out for bogey and was greeted by a shower of champagne.

A brilliant approach ➡️ birdie putt ✌️@leona_maguire now leads by 3⃣ after after 11 holes in the final round of the #DriveOn Championship! pic.twitter.com/Jc0mxTsu1I

A record-breaking amateur who spent 135 weeks as world number one while a student in Duke University, Maguire enjoyed a breakout year on tour in 2021.

As well as her Solheim heroics, she recorded two second-places and four top 10 finishes in total on the LPGA Tour, as well as sixth in the Evian Championship as she finished the year ranked 43rd in the world. 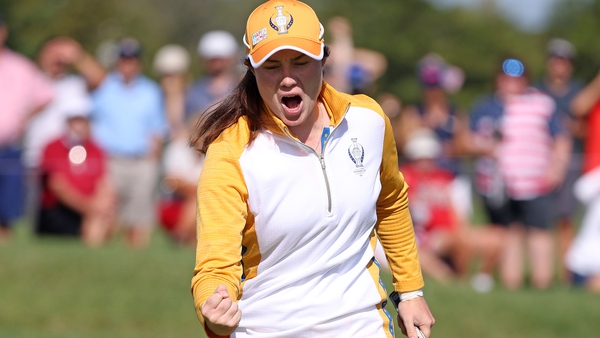