Defending champion Jin Young Ko of South Korea held a three-shot lead when play was suspended due to darkness Friday during the second round of the Cognizant Founders Cup in New Jersey with Stephanie Meadow sitting nine strokes back.

Meadow had to return early to finish her first round after weather had also interrupted Thursday's play, and after carding a one under par 70, she quickly followed up with a level-par 71 to earn a place inside the top 50.

There was less joy for Cavan’s Leona Maguire who never looked like making the cut after finishing day one on four over par. A second-round 74 left her at the tail-end of the field.

Ko was two under through 14 holes of her round and 10 under for the tournament, three ahead of Lindsey Weaver, South Korea's So Yeon Ryu and France's Perrine Delacour.

Ko, second in the world rankings, could extend her streak of rounds in the 60s to 12. Annika Sorenstam holds the LPGA Tour record at 14. Mountain Ridge Country Club is a par-71 setup, so Ko can secure a two-under 69 with four pars when play resumes Saturday.

Ko said she isn't bothered by having to stop a round and restart.

"I had a lot of good opportunity for birdies and left four holes for tomorrow," Ko said. "I will just take a rest tonight and then I will get better for tomorrow."

Weaver, who is seeking her first tour win, is in good position after a rough stretch. In four of her past five starts, she either missed the cut or withdrew.

The 28-year-old made six birdies and two bogeys Friday and was relieved to complete her round before dark.

"Literally nothing is more important," she said. "I was telling my caddie, I would hate to be playing number nine at 7am. tomorrow morning. So I'm happy to be done, even though I made bogey on (the ninth). I'm just happy I don't have to wake up at 5am tomorrow."

China's Xiyu Lin and South Koreans Chella Choi, Jenny Shin and In Gee Chun were tied for fifth at six under. Among the group tied for ninth at five under was world number one Nelly Korda. 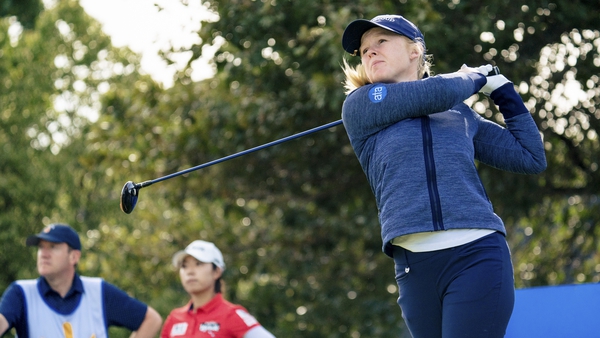