The Cork golfer went into the Madrid event on the back of a tied-ninth finish in Scotland last week and opened with a three-under par 68 to leave him seven shots off first-round leader, Englishman Ross McGowan.

Murphy bogeyed the par-three third but birdies at the ninth, 14th, 16th and 18th left him in a tie for 40th.

It was a tougher day for the two other Irish golfers involved with both sitting outside the top 100.

Jonathan Caldwell is back on two-over par with Cormac Sharvin two shots further back, meaning both need a strong second round.

Rahm arrived in Madrid looking for a third consecutive win in his home open and delighted the fans with a 63 that moved him to eight under but he could not keep pace with McGowan.

The 39-year-old missed nine cuts in-a-row between April and August but found his form in stunning style with a 10 under round, 12 years after he claimed his first European Tour win in the Spanish capital at the 2009 Madrid Masters.

"I think a few things have clicked," said the 2020 Italian Open winner. "Some work I have done with the coach and some of the Covid restrictions somewhat easing off, I find mentally I am in a better place, so I think it is a combination of the two.

"I always seem to putt pretty well here and last time I played quite well here too, so looking forward to tomorrow."

McGowan led the way with birdies on the third, fourth, sixth, seventh and 10th but Rahm soon passed him as he birdied the 11th, 13th, 16th and 17th with an eagle on the par-five 14th.

A bogey on the 18th from the US Open champion meant the duo were tied but McGowan pulled away as he went birdie-eagle-birdie from the 13th before making another gain on the penultimate hole.

Rahm then picked up shots on the fourth, seventh and eighth to sit just two back.

"It was a really good start," he said. "Played eight flawless holes and then a bit of a stumble from 18 through three, I didn't hit my best shots and was able to save a couple of pars to minimise the damage.

"After that I was able to play some good golf coming down the stretch, giving myself some chances, but obviously we saw what Ross McGowan shot this morning - 10 under is a heck of a round out here.

"I played good enough to maybe do it, but you have to play flawless and make the putts."

Spaniard Sebastian Garcia Rodriguez carded a 63 to put himself between McGowan and Rahm on the leaderboard, with Welshman Jamie Donaldson and Scot David Drysdale at seven under.

Another Scot in Grant Forrest was at six under after he carded a 65 that included a hole-in-one on the ninth and two other eagles. 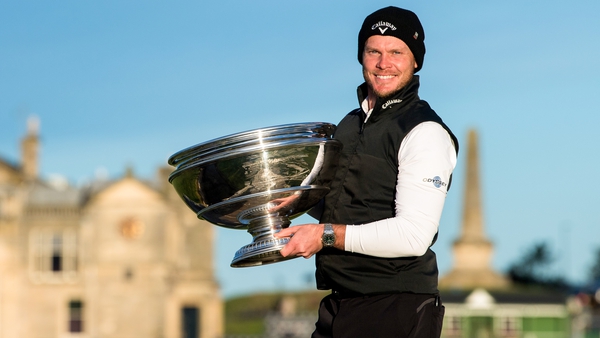