Tiger Woods is not expected to attend this week's Ryder Cup as he continues to recover from his February car accident but his presence will be felt by the American team at Whistling Straits, according to Justin Thomas.

Thomas met with Woods a couple of times last week and although their conversations were focused primarily on his health, the seven-time Ryder Cup veteran remains an enthusiastic supporter of the team.

"He's so into it," Thomas told reporters.

Thomas was part of the Woods-led US team that came from behind to defeat a squad of Internationals at the 2019 Presidents Cup at Royal Melbourne Golf Club.

The 15-time major champion eagerly congratulated his team-mates after the winning putt dropped, making it clear he relishes the opportunity to be part of a team.

"You all saw in Australia how much it meant to him," Thomas said.

"The amount of work and the amount of hours he's willing to spend to make sure that he feels like the team is prepared and as ready to go as possible is pretty cool." 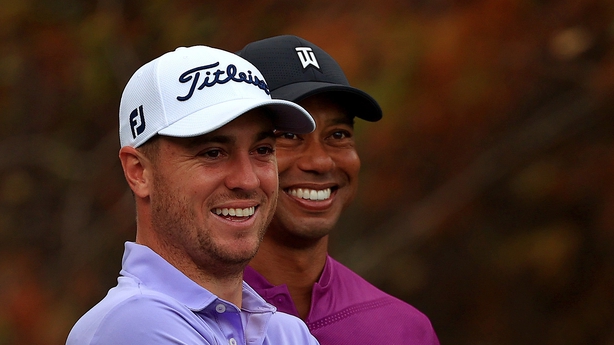 But he said Woods, who had been selected as vice captain before being sidelined by his ongoing rehabilitation, also understands that there is no need to micro manage the US team, which has an average world ranking of nine compared to 30 for Europe.

"At the end of the day he also understands that we're 12 of the best players in the world, and we know how to play golf," Thomas said.

"Sometimes less is more, so I think he's great at balancing that out. It was more, 'I'm here if you need me,' kind of thing."

US captain Steve Stricker said that while Woods will be away from the action, he is still very much involved.

"He's been in my ear a lot and I call him pretty regularly," Stricker said on Monday.

"He's part of our Ryder Cup Team. He's part of what we do. He's been part of so many of these teams. So to bounce ideas off of him, all of us, players alike, I know some of the players went over to see him," he said.

"But I think it's just not a good time for him to be here physically because of where he's at in his rehabilitation and tough course to walk."

The Ryder Cup, which was postponed last year because of the Covid-19 pandemic, begins on Friday.