Padraig Harrington says his Europe team are relishing the opportunity to perform in a more partisan atmosphere than usual at the Ryder Cup this week.

With no European fans allowed to travel over for the event at Whistling Straits, Harrington's players face a potentially daunting atmosphere as they seek to defend the trophy they won in Paris three years ago.

It is not a worry for the 2021 Europe captain, however, nor the team.

"Our players play for the glory of this event. If there was 40,000 US fans and no Europeans, we'd prefer that than having no fans. That's just the reality," said Harrington.

"But they wouldn't want the alternative. Having no fans is no fun."

With his team assembling, the Dubliner said that he arrived for the competition not quite knowing the fitness status of world number one Jon Rahm after illness last week but was reassured once he met the Spaniard.

Rahm pulled out of the Wednesday pro-am for the Fortinet Championship and missed the cut in California having not eaten for two days, saying he felt worse than when he contracted Covid-19 in June.

"He was lifting very nicely in the gym today when I arrived," said Harrington.

"After hearing the reports last week, I arrived in to find him too sweaty to give a hug due to lifting some heavy weights.

Meanwhile, Harrington's counterpart, United States captain Steve Stricker, insists that he has no worries over the mindset of Brooks Koepka as they head into the tournament.

In an interview last week the four-time major champion said he finds the biennial event "tough, hectic and a bit odd" and also expressed his frustration at not being able to "take naps" during the week.

It appeared to offer another insight into the disharmony within the American team room which critics have linked to them losing nine of the last 12 matches.

Koepka, who has declared himself fit from a wrist injury which prevented him from joining a two-day reconnaissance at Whistling Straits with the rest of the team, also brings a long-running feud with Bryson DeChambeau to Wisconsin but Stricker insists everything is under control on both fronts.

"I have talked to him about it," said the USA captain over Koepka's comments.

"I've had experiences with Brooks over many of these teams and the conversation I've had with him and what I've personally seen in the team room doesn't 'jib up' to what I was reading in those articles.

"I am not worried about Brooks. He assures me he is healthy and 100% and he is on this team to do whatever needs to be done to be a winner at the end of the week.

"I've been talking to him every couple of days since it (the injury) happened and he tells me everything is 100% and he is ready to go.

"From what I understand he is fully healed and ready for anything."

The Koepka-DeChambeau relationship is likely to be a thread running throughout the week as players appear in front of the media.

Stricker has been asked about it many times before so had his answer prepared when questioned.

He added: "It's a non-issue for me and the team. I've had conversations between them both and they have assured me it's not going to be an issue.

"I had a dinner, they all showed up, had great conversation and they are completely on board. I have no worries whatsoever.

"Will we pair them together? I don't think so at this point but things could change. Could always happen. But probably not."

Stricker does not expect Tiger Woods, recovering from a car crash in February, to make an appearance during the week in a vice-captaincy role.

"Probably not going to happen," he said. "He's been in my ear a lot and I call him pretty regularly. He's part of our Ryder Cup team. He's part of what we do.

"I know some of the players went over to see him but I think it's just not a good time for him to be here physically because of where he's at in his rehabilitation.

"But he's getting better and his focus is on making a comeback to play again. We don't want to get in the way of that because we would all love to see him come back and play." 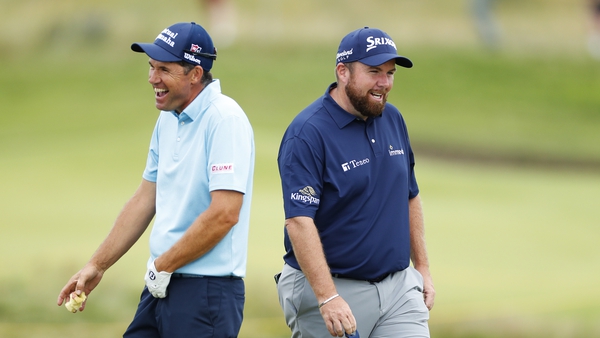