Padraig Harrington is best of the Irish on three under at the halfway point of the D+D Real Czech Masters.

The Europe Ryder Cup captain followed up Thursday's opening 70 at Albatross Golf Resort with a one-under 71 in Friday's second round to move up to three under and into a tie for 29th, seven shots behind leader Sebastian Soederberg of Sweden.

Fellow Dubliner Gavin Moynihan is two shots further back after a 72. Niall Kearney rallied to just make the cut on level par after carding a bogey-free 68 featuring four birdies.

But Kerry amateur Michael Young misses the weekend action after a 75 that left him seven over par.

Harrington suffered just one setback during his second round as he double-bogeyed the 17th but the three-time major winner managed his one under-par-round via birdies on one, two and 10.

Henrik Stenson, who is hoping to make Harrington's Ryder Cup squad, admitted he was pleasantly surprised to remain in contention for a first win in a full-field event for four years.

Stenson has yet to drop a shot at the tournament after adding a 69 to his opening 67 for a halfway total of eight under par, two shots behind compatriot Soderberg.

The former Open champion won the 18-man Hero World Challenge in December 2019 but has not won a regular event since the 2017 Wyndham Championship and had missed 11 cuts in 16 events in 2021 to fall outside the world's top 200.

"I think that speaks volumes of my putting, course management and some tidy shots around the greens when I have been missing," Stenson said of his 69. 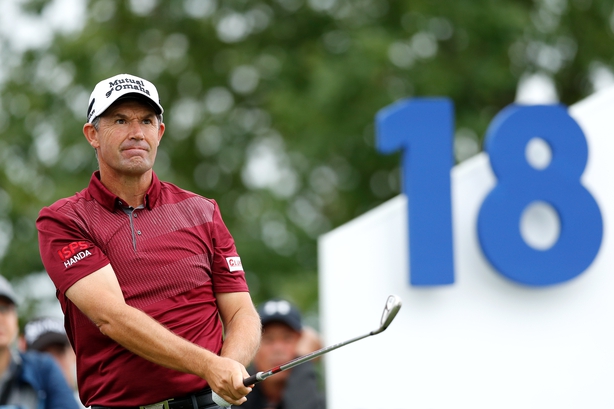 "I definitely give my putting the biggest credit these first two days as to why we're bogey-free and in a good position. There's more to ask with the long game, I want a bit more than I have produced these two days, but we're in good shape and I'm looking forward to the weekend."

Stenson is a long way outside the automatic qualifying places for next month's Ryder Cup but has not given up hope of impressing Harrington - his playing partner over the first two days - enough to earn a wild card for Whistling Straits.

"I've got four tournaments to build some momentum to be in the hat that Padraig is going to pick three names out of," added Stenson, who won all three matches as a wild card in Paris in 2018.

"I expected to give it my best and scoring-wise it's probably better than I was hoping for coming in from three weeks off.

"I've done some practice but haven't been playing a lot of golf on the course as of late, so it's nice to be out there and keep the scores going in these first two rounds."

Soderberg came into the week on the back of four straight missed cuts but fired an eagle, seven birdies and a solitary bogey in a second round of 64 to open up a one-shot lead over Sean Crocker and Adrian Meronk.

"It's been a tough year so far," Soderberg said. "I decided to take a longer break this summer and it's my first event in five or six weeks.

"It's going to be a bit rusty, but I'll try and play one hole at a time. I'm sure there's going to be some pressure, hopefully it's not too bad and I can manage it and keep playing well."