Players who breach coronavirus protocols will be at risk of disqualification from the 149th Open Championship as R&A chief executive Martin Slumbers admitted that issues are "probably inevitable" at Royal St George's.

Although up to 32,000 spectators a day will be on site, the players have been prohibited from going to bars, restaurants and supermarkets and must stay in approved hotels or private accommodation limited to up to four members of their team.

Asked if he expected to get through the championship without players being subject to test and trace procedures or testing positive for Covid-19, Slumbers said: "We have thought long and hard of all the procedures that we need to minimise the risk on that.

"The most pressing part of it is for the players. The worst thing you can get is a player being contact traced, because you're out for 10 days and (have to) quarantine and you can't test out of it, so you're out of the championship.

"They're actually trying to very responsibly understand with these big events how Covid does transmit outside, in 500, 600 acres of land and wind blowing and they're monitoring that.

"There's a different set of rationales for the players and for the spectators. But I think it's probably inevitable that we will have some problems and we understand that, so does Government, so does Public Health, and we'll work through that.

"We mustn't forget we are staging a major event still in the middle of a global pandemic."

Slumbers said a breach of Covid-19 protocols would leave a player "at risk of being disqualified" but, when pressed for a definitive answer, added: "I've learnt being in officiating and rules that you want to understand the circumstances, but I don't think that will be an issue.

"I think players know the risks. They're all responsible. They don't want to put their fellow players at risk. I'd like to treat them as professionals in that regard." 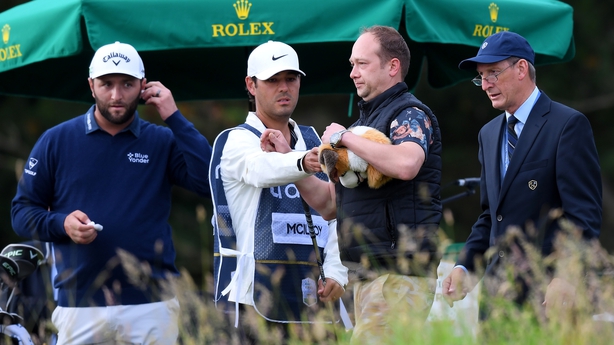 Slumbers is also confident the Open will not see a repeat of the security breach which marred last week's Scottish Open.

A spectator smelling of alcohol was ejected from the tournament at the Renaissance Club after walking unchallenged on to the 10th tee and taking a club from Rory McIlroy's bag as the four-time major winner waited to start his second round.

"We are deeply conscious all the time of the health and safety of the players, particularly their safety," Slumbers said.

"We are not changing our procedures around the tee. As a spectator you can't get on the tee. We have enough marshals around our tees to prevent that, including a number of army marshals.

"There's very strict conditions for any of those spectators to be able to get into the grounds, and they're being held further back from the players than we would normally do. You can see the ropes are further back.

"But I think spectators play a massive part in sport. When you wait and see what the 18th is like on Sunday afternoon when the winner is coming down, when the crowds are in the grandstand, that's what the Open is about for us.

"In terms of safety, we've got plenty of security all the way around the golf course, as we would normally have."